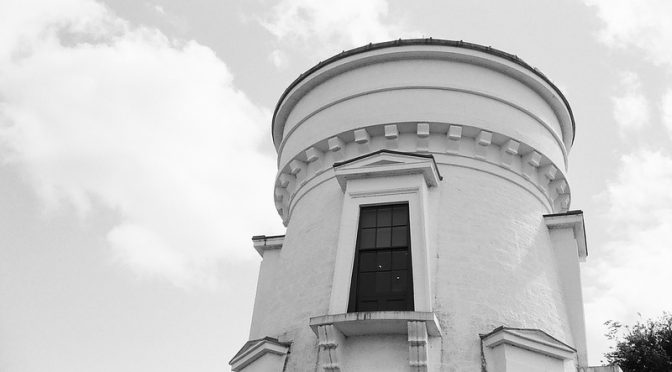 Just a few streets away from where I live sits the subject of our focus today. But why is a former windmill in  a small Scottish town listed ?

Well by 1836 it would have certain device installed in it. That device was a camera obscura which gave us the modern word ‘camera’.

The Mill on the Hill

The  mill was built on Corbelly Hill overlooking the expanding Scottish Town of Dumfries. By 1834 the site was purchased by Dumfries and Maxwelltown Astronomical Society.  It was  planned to convert it to an observatory to catch the passing of Halley’s Comet in 1835-36.

Sadly it didn’t open in time for that. But  in 1836 it had the Camera Obscura installed.  And you can still visit that today. It is felt to be the oldest continuously operating Camera Obscura in the world. It is now part of the council run Dumfries Museum & observatory.

A short history of the Camera Obscura

A camera obscura works by passing a light from a scene through a small hole into a dark chamber or box. The light will be projected on the opposite wall forming a reversed and inverted image. Originally this was done with a room sized chamber to allow viewing of the image on the rear wall. This gives us the name from Latin (camera= chamber/room and obscura= darkened).

Although it may have been used before, it is first documented in 4th Century China. However no records are known after this until the 11th Century when Arab physicist Ibn al-Haytham described in detail the technique including the darkened room. There was a flurry of experimentation following this. By 1502 Da Vinci who had read Ibn al-Haytham produced the first detailed description of how it worked in his notebooks (although these weren’t deciphered until 1797) . The actual term Camera obscura was coined by Kepler in 1602.

The camera obscura in Dumfries has a small turret that rotates with the hole in it which uses a mirror to project the image down onto a viewing table below. This was a popular method in Victorian and later Camera obscuras as it allows for a view that can be moved around a 360 degree arc as this illustration shows

Why the link to photography ?

How did a room sized curiosity get used to describe cameras ?

Well the answer is quite simple. By 1558 Giambattista della Porta described projecting the image onto to paper as a drawing aid. By the 17th century portable small camera obscuras were documented. A classic example is Joshua Reynolds’s one from ~1790 which was a folding model disguised as a book (in the collection at the Science Museum in London)

It would be these devices that adapted by Niepce, Daguerre and Fox Talbot to project the image not on paper or a viewing screen but on a photo sensitive plate or paper creating the first cameras as we would understand.