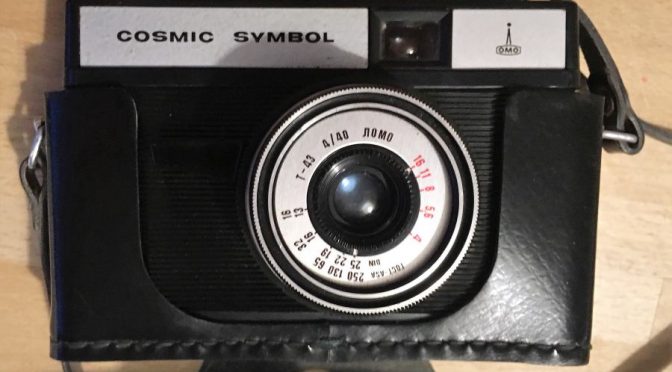 This is nostalgia for me. Th Smena was first proper camera I got given to me as a child although in its UK Export guise as the Cosmic Symbol. But enough nostalgia for the mo….. If you fancy a vintage styled fully manual P&S with FSU character then this could be for you.

I probably shot a few dozen rolls with this as a child & teen before I got my first Nikon SLR. It got left gathering dust at home for many years. Shortly after my father’s death on clearing the house I came across this and that nikon and both arguably got me back into shooting film again. The Nikon lives on but sadly I stupidly dropped the Symbol after shooting just 1 roll. I’ve kinda tried to get another on and off since and finally a working one arrived at the turn of the year.

Not Quite for the proletariat

The symbol is essentially the posh smena. It takes the best of the Smena 8M but bolts them onto a more robust and easy to use body. It’s a n easy choice to try as over 4 million were made. Many of these were for export most famously as the Cosmic Symbol but also as the Revue 135 Symbol and rarely seen the Lomo Panorama.

Launched in 1971 a year after the 8M. Whilst its simpler brother would be made in greater numbers and for longer, the Symbol clocked up over 4 million units in a 20 year production run. Its core specs are identical and like the 8M. This is a fully manual scale focus viewfinder with a T-43 40mm 1:4 lens. The shutter has 5 stops from 1/15-1/250 as well as Bulb setting.

Like the 8M, LOMO intended you to set the aperture to match your film speed. You then adjust your shutter to match the weather conditions. You can of course ignore that and set your shutter and aperture  to how you want. But that’s where things end.

Although the styling link the two cameras, the Symbol is definitely the premier partner. The body although simple is heavier denser plastic. It has a winding lever which also cocks the shutter. You dont need to manually reset the counter. The shutter is moved from the tops to a switch on the side of the lens. The camera gains a hotshoe but loses PC sync and cable point. It also has a normal loading system

A bigger, heavier beast than the 8M.  Despite this, it sits comfortably in hand although the viewfinder remains basic. Like the Smena you set the ISO or aperture on dial around the lenses. It shares the weird ASA settings (250 ASA to f/16 and 130 ASA to f/11 and so on). This makes it a tricky judge for modern 400, 200, 100 ISO. You can set the aperture between these settings (modern negative film is forgiving enough if you get wrong) or set to slightly over expose (e.g set 200 ISO at the 130 ASA setting)

You then set shutter for weather shown in a series of pictograms. Be aware that on the ‘thunder cloud’ setting you’ll be shooting at just 1/15. You can ignore all this as on the underside of the lens you’ll find shutter speeds. You can mount filters (35.5mm) but you wont be able to access the aperture dial.

Although intened to shot with the aperture fixed, you’ll want to avoid the 2 lower shutter speeds to educe camera shake. As I’ve found with the Smena 35 and 8M you want to keep the aperture ideally at f/8 or smaller. The T-43 is good but benefits from shooting with a tight aperture.

It’s an easier camera to use compared to the 8M and 35 and feels more robust. It is a tad heavier and bulkier though. Unlike the 8M or 35 you can’t intentionally (or otherwise) do  multiple exposure (depressing the rewind button doesn’t disengage the winder spool).

The Symbol performs as you’d expect. The T-43 is a good sharp lens when you’re on the ball. I found both with this and my 35 that the focus when set at infinity is just a tad soft. it’s better to shoot under that with a tight aperture. Not the great with lower apertures and isn’t quite on par with the likes of the Olympus Trip 35 optically. But that’s an all time classic.

It also isn’t a lens to add much so no quirky colour shits or bonkers vignetting.

The Symbol is fairly common find on eBay and other sites like etsy or preloved. With over 4 million made, they’re fairly common, but there is some collectability here as as with the 8M there are several variants for the FSU collector to covet as well as the export variants. There are some ultra rare pre-production models out there. See sovietcams for more. Most come with a better than average faux leather case. Expect to pay £5-10 plus postage although on a good day you’ll get under this.

It took me 3 to get a working one. The shutter blades seem to be prone to fail.

Verdict on the Smena/Cosmic Symbol

This isn’t just for the FSU collectors or Lomo kids. This really is a great viewfinder camera to learn your skills with. Perhaps is not a sharp as japanese rivals but of the era, but this all manual stuff. It basically is a refined 8M and its’ interesting to compare the + & – of these 2. To be honest though I’m glad my Dad got my 10 year old self the symbol not the 8M. Although now it’s a more nuanced decision.

The west and Japan weren’t really making fully manual cameras like this by the 70’s. You need to drop back to the 50’s and 60’s to get practical rivals (usually west German). So this is better than the Ilford sportsman but not quite in the same league as the Kodak Retinette series or Voigtländer’s Vito B.

In reality its rival at market were other FSU cameras. These range from the woeful Beiretta K100 to more competent manual shooters like the the BelOMO Vilia. The vilia and the Symbol are pretty close rivals although the Symbol is better finished and clincally better> the villa however has the more quirky lens. Then of course as there’s the other late  smenas like the 8M and 35.

For more on this camera check out Lomography’s microsite. The manual can be found here on a link from the specifications page.