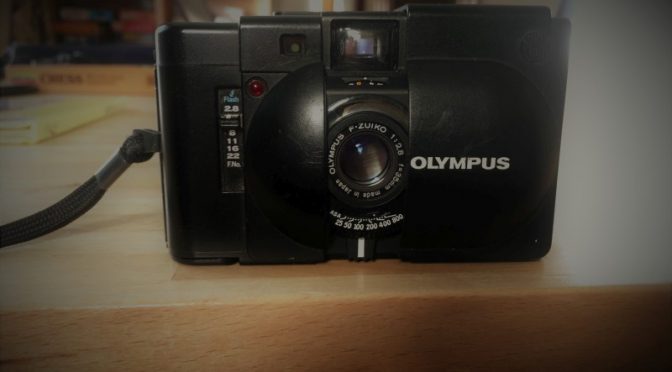 I’d never been convinced that Car boots are always work outs great for camera hunters. Sure you’ll find late AF zoom compact for the same price as you’d pay on eBay  less postage  but IMHO til then true bargains are rare and balanced by someone trying to sell a Knackered Praktica for 50 quid. All that changed when I spotted this grubby number.

Okay no $10 Leica, but this was still a find. The grot and scratches were superficial and £3  netted  one of the highest rated non AF compacts.

The XA on paper shouldn’t have worked. When launched in 1979, AF was starting it’s first baby steps, but despite it becoming the dominant high end compact focus system in the 80’s, the XA series cameras still sold like hotcakes.

Designed by the legendary Yoshihisa Maitani, this is one killer compact. With a revolutionary sliding clamshell,  killer optics and  aperture priority exposure yet all served up as one of  smallest 35mm production rangefinder ever made.

The XA spawned 4 siblings. The XA2 is the most famous and is a pseudo-zone focus point and shoot with a cult following and recently rising prices. I have a love hate relationship with it but I can’t deny it’s a worthy compact. Oddly it was followed by the XA1 a much maligned (unfairly IMHO) fixed focus compact that nicks the exposure system of the Trip 35, The last 2 are much rarer. The XA3 is a revised XA2 with DX coding and a backlight option. The XA4 is a macro scale focusing rarity.

All are wrapped up in the same shell with (bar the XA1) the same membrane shutter and CdS metering.

Back to the XA  – Specs & Shooting

This a wonderfully engineered camera. The lens and the bulk of controls are found behind the sliding cover. And what a lens ! As we’ll see it’s  akiller despite being squeezed into such a small space  – actually just 31mm from outer element to film plane !

Although compact you’ll need 2 hands to shoot including one to move the focus lever under the lens – although a departure to the norm, you get use to it pretty quickly. A slider to the side of the lens allows you to adjust aperture and activate the flash. Feedback in the viewfinder is good with nice frameline,  a clear good size rangefinder square and a needle feedback of shutter speeds.

On the base you have a flip switch for battery test, timer but more importantly a +1.5 EV.

However being so small has its drawbacks. These it shares with its siblings. Most annoyingly, the infamous red membrane shutter which have become notorious for being a bit temperamental as they age. Mines wouldn’t fire with every press but thankfully more often than any XA2 I’ve owned.  Even if you get a fully working one, there is no option to exposure lock by half depressing – the shutter button  is all or none.

The XA series uses propriety flash.  The A11 unit (GN11) is standard but you can pick from 3  other models (i’d avoid the A1L which was sold with the XA4 and has a technically not user replaceable battery).

This is a killer camera optically. As expected, best with the aperture narrowed to f/8-16 (f/22 starts to give a degree of diffraction). That said centrally results are very good even wide open. Things soften wide at the edges most noticeable when the aperture is wide but actually not bad and holds it own amongst the best of the compact rangefinders. For me the Konica C35 edges it with its sharp contrasty lens but you don’t have the exposure controls of the XA.

The wee bit of barrel distortion is much better than it should be for such a compact design. Typical late 70’s CdS  metering for exposure Is most of tim it is on or near the money. You will need to adjust either ISO or the +1.5EV lever for more complex stuff but bear in mind this a 1970’s camera !

This is one of those cameras where the hype really does match. The optically system is a fantastic piece of engineering and also delivers. Olympus could have played safe with a auto exposure number like the later XA1 on, but the Aperture Priority exposure system adds versatility. I still think the Konica C35 edges it optically but this is so much more pocketable and allows for for greater exposure control. The XA and XA2 make great second cameras. The XA2 is better for quick off the hoof shots, but the XA is so much better if you have time.

Prices seemed to have risen recently for both the XA and XA2. Whilst I did see tested examples under £40 in recent eBay sales, you’re probably doing well if you can get for under £70. However for £3, I got a bobby dazzler.