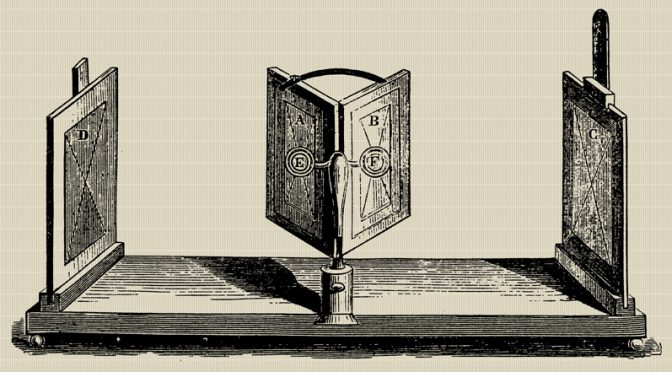 Our object seems to have little to do with photography at first glance. It predates photography’s first public demonstrations, but would move photography from two dimensions into the third. And the tech behind it is still in use today in 3D movies. But its early years were a bit like a 50’s 3D B Movie – A Tale of Monstrous rivalry and experimentation.

The object pictured is the first stereoscope. It was developed by Sir Charles Wheatstone.

Wheatstone was one of those brilliant Victorian Polymaths. Best known these day for his roles in electrical theory and telegraphy, he also created the English Concertina, the Playfair cipher, music and a whole host of other stuff.

Wheatstone’s device looks bulky compared to the 3D glasses you slide on at the cinema. But they both employ the same principle – stereoscopy. They give the illusion of depth of field or 3D. This works by showing different images (usually from a very slight different angle of view) to each eye. Our Brain processes that difference to create the illusion of depth in the image.

Wheatstone developed the Stereoscope without the arrival of practical photography. He used drawings to achieve the effect. His bulky tabletop device placed the images at right angles to viewing frames. Mirrors reflect the images into those frames. Wheatstone began working on it in 1832. And in 1838 it was first demonstrated at the Royal Society.

Daguerre would gave the world the first public glimpse of photography the following year. But like Daguerre, Wheatstone ended up in conflict with another other person. And in both cases that person would do much in those early days to drive the technology forward.

Brewster used lenses and did away with the mirrors. His design allowed for the 2 images to sit adjacent and created a hand held viewer. This is the core design of Stereoscopes that would follow and most of us would recognise.

Brewster was at pains to point out he didn’t create the Stereoscope. However he spent much of his time trying to place the credit on anyone other than Wheatstone.

Rumble in the Optical Jungle

Let’s just say they weren’t exactly the best of friends. He and Wheatstone already coming to loggerheads on their theories on optics of binocular vision. Brewster initially was quite positive about the Wheatstone’s creation. But by 1844 his views become more critical, leading to his own design in 1849.

Thing got more acrimonious in 1856. Brewster’s book on the Stereoscope credits its invention to a Mr Elliot, a teacher from Edinburgh in 1834. An anonymous letter submitted to the Times later that year repeated that claim.

Elliot would go on to clarify he didn’t do this. Also Wheatstone was able to confirm his work began in 1832. But Brewster carried on casting doubt.

Enter a Young medical Student from Edinburgh on his Hols. Alexander Crum Brown whom would become yet another famed Victorian Scientist, visited a museum in Lille in France. On display side by side were two similar drawings by Jacopo Chimenti, a relatively small print Renaissance artist. Crum Brown thought the images had a stereoscopic effect and wrote about it to a friend in Edinburgh. That letter ended up with Brewster.

Brewster whom hadn’t seen the images seized upon this. He started suggesting Chimenti may have discovered Stereoscopy. He even mentioning him in the entry he wrote for the 8th Edition of Encyclopaedia Britannica, the Victorian Era’s Wikipedia.

When photos of the drawings once reviewed by experts showed no Stereoscopic effect. Some think one image is actually a copy by one of Chimenti’s own students.

3D for the masses

Irrespective of his feud, Brewster had paved the way for simpler hand held viewers. And just at the time photography was getting going. Queen Victoria was much taken by a Brewster Stereoscope at the Great Exhibition in 1851. This triggered a rush for them and others like Holmes simplified his design into more cost effective designs. Cameras would follow for professional and the public alike.

Stereoscopy would come in and out of fashion over the following years. But even now it remains a viable technology. You can buy both digital and film cameras capable of shooting either still or moving images using the technique.

ATTACK OF THE MOTION CAMERA !!!

Modern 3D films are based on this principle. The single image on the screen is actually 2 images which are separated out by the glasses you wear. Porter & Waddle are credited with doing this first in 1915 showing test film to an audience in NYC. But it wouldn’t be until the 1950’s that 3D films became mainstream. Until the 1970’s the technique required the use of 2 projectors to synchronously project separate films onto the screen.

The Stereoscope has had a rebirth in the digital age with the rise of VR headsets. These range from expensive VR headsets for gaming such the PlayStation VR headset to DIY cardboard holders. They basically are Brewster’s Design.

There is another 3D technique that exploits this. But it isn’t immediately apparent.

Lenticular printing allows you to create a flat photo or card that has either a 3D effect or causes the image to move or change as you move the card. You’ll remember these as the freebie cards you got with your favourite cereal and this video below does a not bad job of demonstrating the effect

However it still relies on Stereoscopy. Lenticular printing uses at least 2 images which are taken from just slightly different angles. These are cut or projected on photographic emulsion in strips and with different images interlacing together. Finally the whole image is then overlaid with a lenticular lens arrangement.

These lenses align with the interlaced strips. Light gets reflected off each strip in the same direction. So if you look with a single eye you’ll see the whole of just one image. But two eyes will see different images giving rise to the stereoscopic effect.

What of our Rivals ?

Unlike many folk we’ve seen in this series, both Wheatstone and Brewster had long successful careers. Recognised & celebrated in their lifetimes, they remain important figures. Wheatstone would outlive his rival dying at the age of 73 doing research work in Paris. Brewster had a longer life and died as the Principle of Edinburgh University aged 86. Ironically for bitter rivals they both died of the same cause – Pneumonia.

King’s College in London holds the Wheatstone Collection and this post includes an original Wheatstone Stereoscope. Wikipedia have a good Biography of Wheatstone and a detailed guide to Stereoscopy. Nicholas Wade has just published a fantastic review paper on the rivalry between Brewster and Wheatstone.