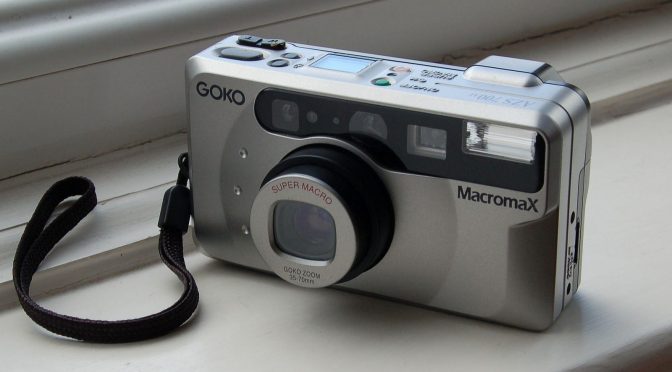 Given my experience with the Goko UF, I had high hopes for this late 90’s AF compact. But sadly my  second Goko  end up as  yet another run of the mill AF compact

Goko is not a name you’ll commonly here & in fact they were better know for making compacts for other more memorable manufacturers. They had two photographic claims to fame. The first was the patented universal focus system for fixed focus cameras like the UF. More relevant here is the second -macro shooting promising shots as close as 10cm on a compact (although not this one).

It looks much like any other entry level compact of  the late 90’s. Its 5 element x2 zoom is pretty low spec but camera has the usual flash modes (auto, on, off, red-eye, slow sync), DX coding, motorwind, timer and landscape mode. On a plus you could focus lock this camera which not all compacts could do. But its real unique selling point (USP) was a limited MacromaX macro mode.

It is a typically normal and dull looking camera of its age. There is permanent transparent lens protector rather than closing which ain’t great IMHO (just something else to scratch) and the battery compartment requires a lot of force to open.  It has the usual zoom toggle switch, LCD display  etc that you would expect. A data back version also exists. What lets it down is the lack of any feedback about your focus. You can literally stand 2 inches from a wall and the camera ready light comes on and you can take shot. The viewfinder is simple with a focus spot and marks for parallax error when shooting in macro mode (no marks for distance shooting note)

In normal mode it is reasonably quick and shot about as fast as my Pentax Espio AF Zoom. That’s a much earlier camera but shares a similar zoom although for its day was a much more high end beast. It still out strips the Goko with the available modes  but that said the Goko doesn’t too badly and does have a useful slow flash sync (1/4 sec) and the landscape mode (compact AF cameras don’t really do distance focusing). Both cameras like many other compacts push the auto flash on around EV100 11-12.

USP macro mode is  not so great . It has its own dedicated button but essential the camera goes straight to wide angle & forced flash.  The closest you can get is 25cm. That does sound all that bad but the Pentax Espio AF Zoom   can officially focus down to  60cm at all focal lengths in normal operation – so a 70mm almost matches frame size for the Goko and you can turn the flash off. The flash is something you’ll need to be aware of with the Goko for these shots as it can be overbearing. Again there is little feedback beyond the inital phase

In normal shooting, it’s a game of 2 halves. With 400 ISO B&W things look okay and actually quite acceptable. But shoot with 200 ISO film exposure things are not as good. Exposure is 90% okay but at times is off. Focus wise the camera is okay at the short usual range up to around 5 metres but softens off beyond this. The landscape mode helps but this is pretty mediocre fare. You’ll note the top speed of 1/330 sec and the truly woeful maximum aperture on tele mode which doesn’t help alongside the lack of any focus feedback. As you would guess things seem softer still at the tele end of the zoom.

This would have been okay in it’s day as a cheap family shooter that you picked up in a panic on the way to the airport but given the negligible  cost of much better AF compacts these days is hopelessly outclassed. In the end it is just another mediocre AF and given its rarity, you’ll potentially pay over the odds. Save your cash and buy Pentax with some rolls of film for the same money.