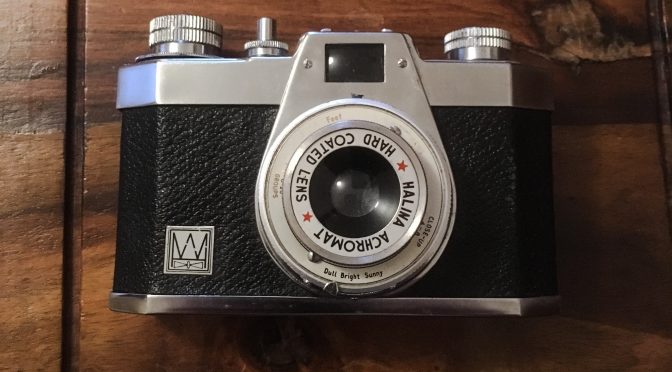 This quirky retro looking Haking number actually dates from 1962 not the 1950’s. I’ve  no idea what PET stands for either but this Haking oozes more individualistic retro style than its more infamous sibling the Leica lookalike the 35x.

Underneath the retro styling, it is a well-built, simple but effective camera from the heyday of Haking cameras. I suspect it was introduced as a more simplistic model to the flagship 35x (did I really use the word flagship and 35x ?). I suspect it influenced the styling of the later Super 35x  as the top plates bar winding knob is not dissimilar. Metal built, it is heavier than the average compact but still neater than the likes of the Ilford sportsman and carries the ’empire made’ moniker.

The camera is much more simplistic than the Sportsman or 35x. You get a choice of 1/50 (I) or Bulb (B) for shutter and 3 Waterstone stop apertures marked Dull, Bright or Sunny.  These are described in the March 1963 edition UK pharmacy trade magazine as f/8, f/11 and f/16.This would match the  known figures for the medium format Halina 6-4 that was launched the same year used  settings with a 1/50 shutter. Also 2 of the films listed in the PET manual as medium speed (Ilfords FP3 and Gevapan 30) were rated at use at 64-125 ISO ¹ so exposure-wise it makes sense. This is of course a manually set camera.

The  ‘Halina Acromat Hard Coated lens’ like the 6-4 uses chance Pilkington glass (not a great Ad these days as Pilkington is better known for Windows and Windscreens). No info exists on focal length but on rough measurement the focal plane is ~45mm from tip of lens (the 35x is 45mm). Focusing is by 3  zones  which is a bit weak and you’ll need to tilt the camera on side to see the focusing dot. However using modern 100-200 ISO film is a boon on focus as you’ll tend to shoot at the 2 smaller aperture improving hyperfocal distance although over exposing in bright light remains a constant risk. 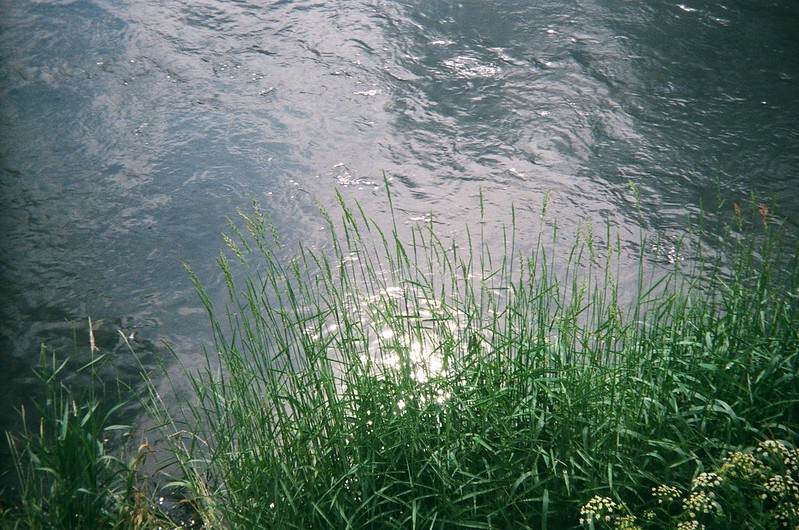 This ain’t going to give a Voigtländer a run for its money nor even the sportsman. Images are soft even at f/16 and as you’d expect they are better centrally. There is also a degree of pincushion distortion.

The camera as of its time is threaded for cable. Mines came with case and lens hood but as with my 6-4 the case literally disintegrated with minor use at the seams. The oddly plastic lens hood is push on and makes focusing difficult. The camera has knob winding and in theory you st the film counter (I struggled it counts down rather than up)

It is a cool looking camera and the images are retro – i.e soft and prone to aberrations. You could live with this but the 3 zone focus just magnifies the problem and ultimately is the killer issue. One for the Lomo kids or collectors really which is a shame as I wanted to really like it.

¹Ilford FP3 was originally rated at 64 ASA but changed in ’61 to 125 ASA but this seems more based on developer improvements than emulsion changes (see filmisnotdead’s chronology). Gevapan 30 info is a bit harder but according to the Analogue Photo Lab  Blog has been both described as technically rated at 125 ISO but elsewhere recommended to shoot at 64 ISO in daylight