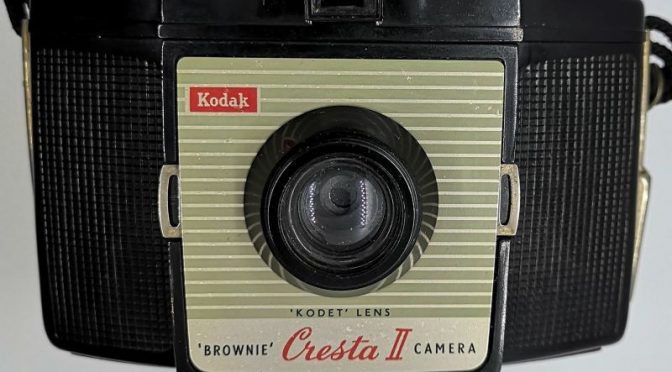 I’d been strangely unsatisfied with the Cresta 3, the third of Kodak UK’s Bakelite Brownies for 120 film. But could its glass lens predecessor be a better choice ? It is but you all need to brace youselves in more ways than one.

The Cresta series have the distinction of being the only Brownie cameras to use 120 film outwith the original Brownie No. 2 and its derivatives. It was also only 120 box purely made by Kodak Ltd (the UK wing of the company). It doesn’t seem to have been sold much beyond Blighty and the what you would now call the EU. Three models were launched – the Cresta (1956-58), Cresta II (1957-59) and the Cresta 3 (1960-65). They are very similar and share a common ancestry with the UK made Brownie 127.

Wrapped in curved plastic they beguile their simple box camera design. They all shoot 120 film in a 6×6 format with a fixed focus lens (likely around 75mm) with a single shutter and aperture setting. The film plane is curved to improve focus from the simple lens

The Cresta II like to orginal Cresta has a Kodet glass lens (the Cresta 3 has a plastic one). Shutter speed is fixed at 1/40 and the aperture is fixed at what is often described as f/11 down from f/14. However in 1959 the consumer association (Which to you and I) reviewed this camera as part of a bonkers group test. Which took 21 budget cameras and ran over 100+ rolls of film to stress test these. They described the lens as a simple meniscus with what they measured as a f/14.5 aperture

On the lens protrusion you have a sliding metal strip which allows you to slide in either a yellow filter or a close up lens (for 4-7ft). Although the close up & yellow filter options are handy, it means the Cresta has way less control than a 1902 Brownie No. 2.

Otherwise the Cresta II differs only in flash set up from the orginal. That had a PC sync point whereas the II and the later Cresta 3 used a proprietary Brownie screw and pin flash connector. Whether either of these can sync to a electronic flash unit is debatable. Flash bulbs need a fraction of a second to warm up to full brightness where as electronic flashes get there almost instantaneously.

My gut feeling is that the slow shutter allows the camera to sync with common M class shutter bulbs which would reach peak brightness at around 15-20 milliseconds before the shutter closed. But I can’t test this easily. John Margretts felt that the flash circuit triggered before the shutter opened in his review of the original Cresta.

It’s a straight forward affair in use. Shutter button is top mounted but I found the amount of travel on mines puts the camera at risk from shake (an issue with the already slow 1/40 shutter speed). I found you really need to use both hands and brace yourself. As we’ll see that does benefit things

To open the body you turn lock on the base and top and film carriage lifts out of the base. The film plane is curved to improve the image from the Simple fixed focus lens.

As I indicated in the spec you can slide either a yellow filter for B&W or a close up lens into place by a simple metal pull bar on either side of the lens. The shutter is a simple and doesn’t need cocking. As there is no lock doing multiple exposures either intentionally or by accident is easy.

Brace Yourself – the Results

If you don’t hold yourself still and try to prepare for the shutter depress, the results are crap. The brownie No.2 works better as you hold it at waist level with relaxed arms. Here you’re trying to hold a bulky camera steady at eye level.

If you can brace the camera or yourself this can be quite pleasing. You’ve a fixed 1/40 shutter with f/11 so yu need to select your film to match light conditions. As other than sliding in the yellow filter for B&W (thereby adding a 1 stop filter factor) you have zilch control over your exposure. The camera gears for EV 13 at 100ISO so if you adjust for this with your film (the Lomography 400ISO film was used in the evening for example)

The camera exhibits some pincushion distortion. Nothing bad for the class but certainly there. it softens to the corners and vignettes slightly as you can see in the shots. Fringing can be very evident in some shots.

Doin’ the maths indicates if Kodak set the focus to the Hyperfocal distance that would be at just over 11m. This would mean the camera could only take acceptable sharp photos to around 5 ½ m (if not using the close up lens). Centrally things do stay sharp as the photo above shows – I’m about 120-130m to the 6 windowed building on the othersie of the bridge. Off centre things fall off rapidly

Kodak indicated the camera should focus from 7ft to infinity without the close up lens.. Personally I think things are a little soft around 3 meters. Sliding on the close up lens certainly helps around the 2m mark however.

This is a simple box camera typical of the mid 1950’s. It is neither good or awful. It is better than its plastic lensed successor but offers nothing over the original model. All 3 models suffer from a slow 1/40 shutter speed which makes them prone to shake. Also there are better similar cameras like the Agfa Click. Personally the Agfa Isola series and subsequent Isoly Series offer more functionality with almost as much retro charm.

You also need to make some hard decision re film as the slow shutter and narrow aperture makes for an unwieldy combo although in reasonable light the latitude of 100 ISO will carry you.

It looks okay and if you wanna 50’s chic but for some reason don’t like the much better Agfa Click you could do worse. Otherwise it really is one for a Kodak collector although the No.2 has more retro charm and History.