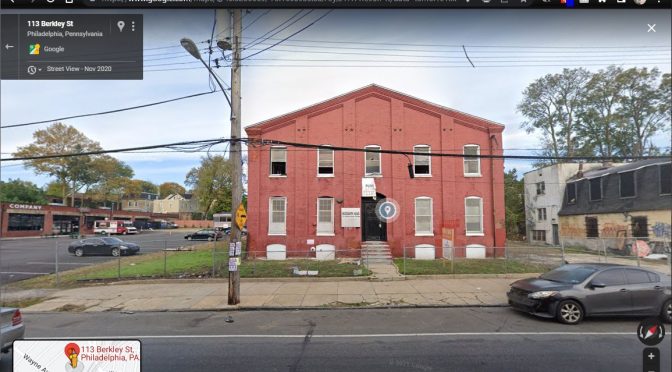 Although Street view arguably merits a place on this list. Our focus today is the building shown. Sadly by Mid 2021, it is no longer in existence. But it in many ways changed the photography world just like street view has over 130 years later. And that’s down to one man John Carbutt.

This is the birthplace of consumer photographic media which started the process of moving photography from the preserve of the professional, wealthy and chemically minded to the average person.

The fact that you can still see this reflects one of the 21st century revolution in imaging the world.

A Street for a View ?

Street view traces its roots to 2001 as a project by Stanford University funded by Google. It would be formally launched in 2007 in the US before spreading out across the globe. Our subject building was first added in October that year.

By 2022 83 Countries have wide coverage. Although to date that coverage largely is only in the developed world. Most of Africa, Asia, Central America and Middle East are not included.

The cameras used are all non mechanical with electronic rolling shutters and position sensing done by GPS and vehicle info. Laser rangefinding is used to help build the world and has been further enhanced by Lidar scanning since 2017.

It is being used for an ever increasing number of purposes from art projects, urban planning, environmental monitoring. It also serves as a vast archive of the world around us. Although that as ever with photography, has brought privacy concerns. It’s widely used by the public to look at areas and routes alongside other Google earth and map tools. And who hasn’t look at one of those top bizarre things on streetview lists

It can be used now to show historical changes.

And sadly the next time the street view car passes 113 Berkley Street in Germantown Philadelphia , the building will not be there.

But that’s apt for building that measured change. And it’s the building not street view that is the subject for this post.

The building shown represented progress in the commercial development of photography. So its disappearance but survival in one of the world’s largest databases of images in someway apt .

The importance of the building is thanks to one man – James Carbutt.

John is yet another English Victorian innovator you may not have heard of. A Yorkshireman born in 1832 in the so called Steel City of Sheffield, Carbutt headed cross the pond to make his fortune. He easily could be remembered today as an important early US Photographer. He produced some famous work of the Union Pacific and the Canada’s Grand Trunk Railroad. And was one of the first US photogs specialising in the Carte de Visite (CdV).

But it’s what he did at 113 Berkley Street in Germantown a historic suburb of Philadelphia that changed things.

Carbutt’s Keystone Dry Plate And Film Works opened in 1878. Within a year it would change photography on so many levels but is now a forgotten footprint.

In fairness John never was first to come up with the concepts.

But he was the first to commercialise them.

In 1879 it would be the first company to launch commercial production of a dry gelatin plate. This is of course based developments by Maddox at the start of the decade). But it was a massive step forward having same make them commercially.

But they didn’t stop there

Prior to 1873 early emulsions had limited sensitivity. They were pretty much sensitive to only blue, violet and ultra violet spectrum light with a little green sensitivity. Vogel tore up that rule book in 1873 when he develop the first Orthochromatic emulsion (green-blue sensitive) in 1873.

This whilst not perfect, significantly improved things.

And then there’s the move to Celluloid

It was Carbutt’s team whom first perfected making plates using this rather than glass in 1888. Celluloid allow a lighter, less easily broken carrier material that had some flexibility.

Carbutt got his celluloid from the Hyatt Brothers whom we met in our last post in this series.

“The substance I have the honor to bring your notice tonight is thin sheet celluloid, manufactured by the Celluloid Manufacturing Company, of Newark N.J. It is some three or four years since I first examined this material, but the manufacturers had not then perfected the finish of it to render it available, and it is only during this year that it has been produced uniform in thickness and finish, and I am now using at my factory large quantities of sheet celluloid one-hundredth of an inch in thickness, coated with the same emulsion as used on glass, forming flexible negative films, the most complete and perfect substitute for glass I believe yet discovered on which to make negatives and positives.”

But although it had potential it would not prove to be as popular as Carbutt maybe hoped. As Colin Harding noted.

“Despite its obvious advantages, celluloid did not attain any great degree of popularity in the 1890s with what was a largely conservative-minded photographic community. When the initial novelty wore off, a number of criticisms began to be voiced, in particular regarding the alleged deleterious effect of camphor on the emulsion” 2

But it would pave the way for the development of celluloid roll film. This would revolutionise photography allowing for the explosion in consumer photography with the arrival of cheap consumer cameras like the Kodak Brownie in 1900.

The rise of roll celluloid film is a story for another day.

Carbutt’s role as a practical innovator arguably killed him.

He is credited with the development of the commercial medical X-Ray plate. But according to The Local, and excusing the pun, Carbutt didn’t just develop this. He set up one of the world first X-ray department at Keystone Dry Plates for the Philadelphia hospital from 1896.

He would administer the exposure himself. Sadly there was poor understanding of the risk of X-ray exposure in the 19th and early 20th century. And given the lack of shielding and other safety precautions, this may have contributed to his death. His death in 1905 in part due to tumours much more likely due to X-ray radiation than any Egyptian curse.3

After Carbutt – Pinned on the future

Weirdly 113 Berkley Street is arguable often more synonymous with another widely used invention – the push pin. Edwin Moore the inventor of the push pin set up his first factory here in 1912. Moore Push Pin Company was a presence until it left in 1977.

By this time Germantown was well into its post second world war decline. It had been a historically important area in American History from its founding in 1693. It was the site of a Revolutionary War battle, & the First Bank of the United States. And arguably the birthplace of the American Anti Slavery movement. But it suffered in the post war era and the impact of the so called great migration.

The Keystone dry plate works, like many neighbouring industrial buildings had become empty. It was last open as the Recovery King addictions rehab centre.

There has been an effort to revitalise the area in recent years. But unfortunately there have had to be some sacrifices.

Carbutt’s works Gone but not forgotten

And last year 113 Berkley Street joined the casualty list. The current redevelopment owner applied to pull the building down. He cited the financial hardship in either renovation or maintain the building. As Germantown infohub noted – “Weinstein also took to Facebook to explain , ‘We bought this historic building more than two years ago with every intention of saving and reusing it. He knew that the needed renovations would cost nearly $5 million but says the Recovery King building was “too far gone.”

It was pulled down in early 2021. The site will hopefully part of the re- development of the area as mixed residential and business building. The OCF Realty blog features both the aftermath of the building’s removal and the proposed new unit.

But the Plate works will live on as a historic point in film development . And on the archival features of street view.

And that somehow feels appropriate

Google street view image used within licence restriction from Google with many thanks.