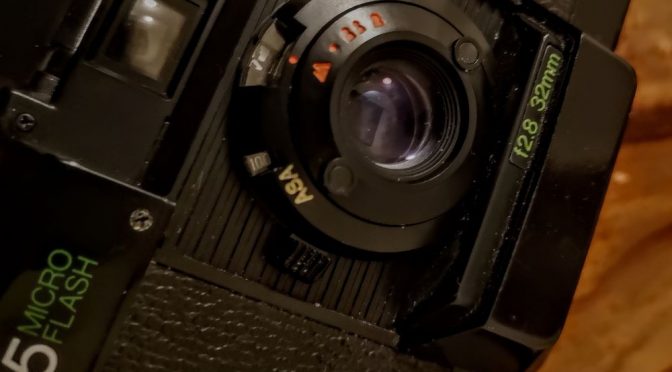 When Cosina launched the the CX-1 & CX-2, little did they know they would become more famous as the cameras that inspired the Lomo LC-A. But that spark was not limited to the (in)famous Russian copy. Several other makes produced similar designs and here’s Hanimex’s take.

We’ve trod this ground before with the Halina 35 Micro (aka the Hong Kong Lomo) which was disappointing due to lack of focus, exposure control and any over-riding of an overly sensitive auto flash. The Hanimex instantly won me over as it resolves all 3 of those. But is it any good and is it a lomo rival ?

Launched Australia in 1947, Hanimex began life selling other companies cameras gear. But it would move rapidly selling rebranded products under it’s own name. These varied from quite high end cameras made by Ricoh or Pentacon to the lower end. Ranges could be highly variable so the Compact R was a rebadged Ricoh 500G but the Compact C was a Halina 35-600.

Our subject today was one of several Hanimex 35 cameras. This rag tag bunch of cameras goes from SLR like the 35EE (a rebranded Chinon Memotron CE) to the lower end such as the truly awful twin lensed 35 DL

However the 35 Micro Flash at first glance seems a bit more up market.

Launched in 1980 at Photokina – it hit the shelves the following year and was frequently mentioned in round up of ultra compact cameras such as this one in Popular Science. It’s otherwise a well built camera and appears to have been the smallest flash compact on the market at the time. It lists alongside such alumni as the Minox, CX-2 & XA2 despite it’s limitations. It sold at $119.95USD only about $30-40 less than than the Cosina CX-1 and the XA2 !!!

With everything closed down it does have a CX-2 look, but note the absence of a flash mount. That’s because a built in flash is hidden in the swing up lens cover. This unique door like feature makes the camera look like it has the same built in flash you get on some later SLR cameras. The build is good with a plastic shell wrapped around a metal skeleton.

It was launched alongside the 35ee Micro (not to be confused with the SLR 35EE). This at first glance seems to have automatic metering. It was rebranded or copied as several cameras including the Soviet Zenit ME35. The 35ee Micro was known in Japan as the Hanimex Beetle and seems to have a bit of lo-fi cult status there. However there is cant information online about these 2 cameras .

I’d read from Sylvain Halgand that the camera is auto exposure. It was only half way through the first roll of XP2 I noticed there was a second lever controlling the aperture ! I’d assumed it was for the focus. Doh !!!! – it’s manual !

This is an easy enough camera to load with a standard pull up rewind knob to open the rear. Thumbwheel advance for moving the film on as you’d expect..

To set up the camera and shoot you need to flip up the lens cover/flash. On the lens bezel there are 3 controls. Firstly a rotating dial around the lens moves between the 4 focal symbols (headshot, couple, a dot and mountain). I’m Guessing this is around 0.8, 1.5, 3 m and to infinity as per other 4 zone shooters

Below the shutter button is a switch that moves the ISO setting. This changes the displayed setting but also moves a slider in a small window above the lens. What you’re meant to do is move the third switch on the other side of the lens so a icon appears in the window matching the weather conditions. There are seven notches which I’m hazarding a guess as full stops from f/2.8 to f/22. The narrowest aperture is not actually used at any point in conventional use.

I’m guessing the camera actually shoots in 1/180 all the time unless the flash is turned on). So the settings make some kind of sense (e.g sunny with 100ISO @ f/11 1/180). So essentially what you have here is similar to the Pentax Pino 35 but in much fancier wrappings.

The low light warns you if things won’t work without flash. I don’t think this responds to the dials much and probably kicks in if light falls below a certain fixed EV value. The flash is triggered manually by switch on the rear.

You can of course use without batteries. I guess the change of shutter is to do with the triggering of the flash but I don’t know if that happens physically or electronically. You can of course ignore the predefined settings and use as a shutter fixed camera with variable aperture setting.

The viewfinder is simple and has no info about focus unlike the LC-A & CX-2. There’s not even frame lines. As the camera is manual you’ll need to look at the lens bezel to set aperture and focus everytime.

When finished rather than depress a base rewind button there’s a switch on the back. However you use the standard rewind knob.

I wasn’t sure what to make of this. Hanimex have some brilliant rebrands and some absolute mingers..

Oddly I was pleasantly surprised but with some caveats

With 400 ISO and some light, the lens is actually quite good. Centrally when you’re on the ball with the nearest 3 zones I could even go as far as saying sharp (provided you’re in good light), It softens to the edges a bit. There’s minimal vignetting and only very mild pincushion distortion

It flounders a bit in lower light. Zone focus shooters are always weaker here. To be fair the camera is not intended to be used this was pushing you to use flash. This is no LC-A or XA2 in low light (but they’re aided by automatic exposure).

The Long shots also seem a bit on the soft side. I’ve no idea of the flash range but am guessing the camera has a GN of 10 or less from the shots I took.

So things are a bit hit and miss. If used as intended and with fast film you’ll get alright shots actually quite good a lot of the time

1 or 2 of these seem to be on eBay at any time. I got mines for £15 + P&P. The 35ee Micro seems rarer still (? cult status) and the Zenit MF35 is rarer still. However Stephen Dowling of Kosmo Foto rated it as one of the worst cameras he’s ever used. It may be that this a Chinese copy of the Japanese made Hanimex.

Is this the Aussie Lomo ?

But it is a reasonable attempt at a CX-2 clone. If used with faster film and in good light it’s actually quite good and the manual control is an interesting concept. It’s actually like using a Smena 8m with a built in Flash. Keep it tight and you’ll get good results. Widen that aperture and things slip.

It is an odd camera that you can happily shoot in good light along sides the likes of the Olympus XA2. But unlike the XA2, either use flash or leave at home when the light drops. It works out more compact than a XA2 with a flash unit so this might be worth considering as a pocket carry anywhere camera provided you can live without long shots in Low light.

Now this has left me intrigued by the 35ee Micro. But it relies on the camera being set to keep the aperture tight. If not, it’ll be dire and after Stephen’s warning I’ll leave the Zenit branded version alone.