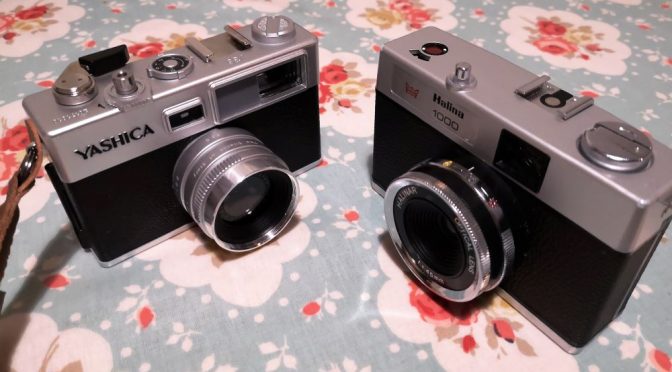 When the Yashica Y35 arrived last year it got a bit of a pounding. Much of that was to do with overvalued expectations about this retro styled digital shooter. It’s essentially a lo-fi beast that has does do a slow film style shooting well. It has imitations mainly the hefty current price tag and limited optics. But often it’s compared to much more technically able digitals. So how does it if fare against another retro inspired but analogue lo-fi favourite the Halina 1000.

The Y35 was widely panned initially and I was one of the few who had anything positive (with caveats) to say about it . But since then more nuanced reviews have popped up such as Hamish Gill’s review at 35mmc and DPReview on YouTube

The better reviews point to this being a toy camera so lets compare it to a plastic fantastic number. I’m deliberately picking a middle of the road one here. No VUWS and it’s can’t believe it’s not glass optics nor anything too foul.

The Halina 1000 was the runt of the Thousand series from the 1970’s. Whilst the Halina 2000 & 3000 could hardly be called high tech, they did come with glass lenses & significant controls from focus to full stepping exposure.

The 1000 is not that sort of camera. we’ve a simple plastic fixed focus 45mm lens with 3 aperture settings and a fixed circa 1/60-1/125 shutter. It is nicely styled like a bigger late 60’s classic compact. It is also closely related to the Halian/Ansco 35 and a host of other cameras. It’s a simple easy to use camera.

Our Y35 allegedly is styled on the Yashica Electro 35 but is much smaller. It too is fixed focus and has a fixed f/2 aperture. The 1/2.5″ 14MP CMOS sensor is allegedly 1sec-1/6000 although I have no idea as I keep getting a shutter speed of 1 second in my EXIF. Powered by 2 AA batteries it supports SDHC cards. Unlike most digital cameras there is no screen so you can’t review. And that hot shoe like slot isn’t one. So no flash option

On of the Y35’s USP is DigiFilm. These are APS sized modules that you slot into the ‘film’ compartment. Effectively they provide a setting and filter effect to your images. At the time of typing there are 6 available. The camera’s standard pack came with a 200 ISO colour DigiFilm which we’ll see here alongside the B&W module.

The Halina can funnily enough be loaded with any 35mm film that’s on the market. It is of course more limited in it’s EV100 range (13-15 v the Yashica’s theoretical 1-15) but if you know what you’re doing you’ve wider options. Given there’s no metering E-6 is best avoided.

The Y35 as been derided because of it’s build quality but it actually feels more robust than the Halina. To be fair the Halina is here 30-40 years since it was made and at least it’s film door catch actually works. But its door is decidedly creaky. It also isn’t weighted to give that quality weight feel.

However the Halina shows some scuffing but given it was made before some of you were born that’s not too bad. Also the film counter need to be set manually and is prone to be not too reliable. However if the Y35 survives 3 decades as intact as the Halina I’ll be impressed. It has survived my camera bag for the last 6 months which is no mean feat,

The Y35 at least is filter threaded although I daresay you could find push ons for the Halina.

Both cameras ape the classic 1970’s silver and black Japanese rangefinder look. In Halina’s case it was more transient linking back to the cameras of the preceding era, trying to fool customers to thinking they were getting more than they paid for. In the Y35 case, oh yeah….

The Halina is a no nonsense camera. You load your film and shoot. All you need to bear in mind is the 3 aperture settings. These are unknown but the Ansco 1065 which is just a variant describes its lens as a 45mm 1:8. This suggest this might be a f/8-16. Arguments about aperture aside this is standard point via the rubbish viewfinder and click the shutter. Then just wind the thumbwheel on.

The Y35 needs to be turned on. A LED shines purple while the camera boots up then turns red to let you can shoot. You’ve gotta crank the camera on with the replica winder before you can take a a shot.

That shot is the main problem. Depressing the shutter doesn’t fire it. Nor does the shutter sound the comes after a second. After 6 months of shooting this camera I still can’t tell you when the shutter actually fires. Move too early and the camera blurs. what I’ve also realised if you keep the shutter depressed the camera records the exposure as 1 second so you get no accurate EXIF data.

It is weird but you do feel you’re shooting with a film camera. That’s probably the absence of the LCD. However the feeling is uncanny and this is a slow photography camera. The Y35 allows you to change DigiFilm after every shot (if you wanted).

This isn’t a fair fight. The Y35 despite it criticism has a multi element glass lens. The Halina has just a plastic number with a fixed shutter speed . You can change the aperture. But trust me you really don’t want to do that. Below the sunny setting anything over 5-10 m becomes too blurry

At Sunny (~f/16) it’s not bad. Soft generally as you’d expect with softening towards frame edges. It isn’t a particularly contrasty lens

The Y35 benefits from the 4 element glass. It is no brilliant lens and you can buy a lot better for the money. But that’s not the point. It radially distorts more than the Halina with its barrel distortion being more obvious than the Halina’s Pincusion as these 2 shots show

Despite the DigiFilm milarky, the Halina has the ability to be more flexible here. You can load it with any 35mm film you want although you might struggle to shoot it. This means you’ve a camera that if you want you can shoot T-max 3200 and push it as many stops as you want in theory. The limitations of the aperture means you’ll not want to take it below 100 ISO film at box speed.

The DigiFilm modules allegedly control your ISO setting but even then within an auto range. The Y35 has a variable shutter speeds and it does seem to broadly get exposure right erring on underexposing at times. Again this isn’t great for the money. EV compensation works well. However the images look like they’ve been a smidgen over processed.

One issue that comes up is the crap latitude you get and taking photos of even hazy sun makes it look like there’s been a thermonuclear detonation. If you get direct sun, you get a black image !! Yikes

You don’t get that with the Halina but it does flare if in direct sunlight.

There’s also something going on with colour saturation on the Y35. That really depend on the DigiFilm but the 200ISO is very much a red heavy Kodak like film. Blackpool tower is a darker red than the shot further up I can assure you.

The Halina really doesn’t do low light (unless you’ve loaded it with T-MAX 3200). But it does do flash

Meaning you can use anything including this GN33 beast and beyond !!

That ain’t gonna happen with the Y35. There’s mount is not standard size and has no contacts for flash. The manual refers to as yet unproduced LED light (yuk). But the Y35 is much more capable of low light shooting. You need to get the scene right as the Y35 can’t do bright light but there’s potential

This is a more nuanced comparison. On one hand we have the Halina 1000 a dependable cheap lo-fi plodder plastic cam from 3-4 decades ago. You can use whatever film you want and you can mount a flash. But…

it gets frankly rubbish as you widen the aperture for anything more than a few meters away. Even at f/16 it’s soft. the Y35 is sharper does better lo-light and has the analogue feel for a digital camera

Overpriced for the money but yet it does alright. You can go out and buy a much better technically digital camera for the money (just have a look here). But that’s not the point. Nor was the point that this would realistically e a reborn Electro 35 for the digital age.

Versus lo-end plastic lensed film cameras, Y35 wipes the floorwith the exception of flash photography. I would still consider it a toy class digital but…. that doesn’t translate to film toy cameras. I’m starting to rethink how to to compare this. The Y35 perhaps should be measure against 1950’s and 1960’s viewfinders like the Franka 125 or Ilford Sportsman.

That doesn’t make the Halina awful (leave that to shooting at anything less than sunny). But it’s not a fair fight.