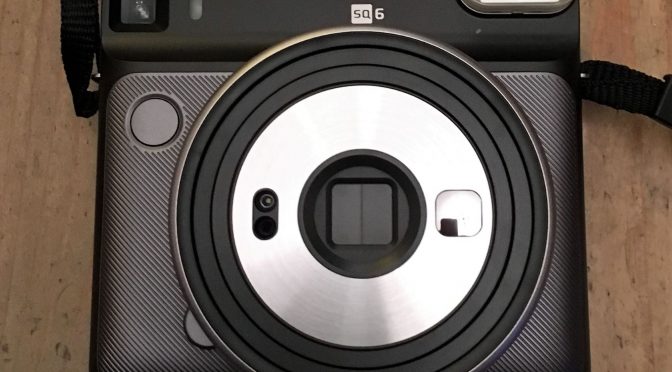 Ever fancied owning a working giant version of the instagram camera logo ? Here’s the camera to meet your needs.

This massive instax square camera arrived thanks to Santa. But how does it measure up and is it a match for its rivals ?

We tend to think of Instax as a new consumer product of the last decade. In fact Instax films were first marketed back in 1998 although outwith Japan sales were not good. That was until the 2008 relaunched.  Interestingly Fujifilm and instant photography actually go back to the early 1980’s when they launched a series of rival instant formats to Polaroid.

Instax is an improvement on Polaroid’s design. All Polaroid cameras with internal film packs require a reflex mirror to reverse the image . However Instax doesn’t need to do this. It also is a more modern emulsion with other tonal and colour improvements. The Square format arrive in 2017 with the weird SQ10. That effectively combines a digital camera and an instax printer. The SQ6 followed in April this year.

But oddly the SQ6 was not the first analogue Square camera. Those sneaky Austrian upstarts at Lomography manage to kickstarter themselves in first with the Lomo’Instant Square. By the close of the year the Lomography Diana Instant arrived.

This leaves the SQ6 in an odd position wedged between these 2 retro inspired beasts. But it’s still worthy of a look. Think of it as the slight older big nerdy sister to the lomo  siblings. More dependable but usually in the corner at parties.

Although made with a lot of plastic, it feels well put together. It feels pretty robust and logically though out. Currently there are 6 different colour variations including an over priced Taylor Swift special edition that adds about £25 for a black version with TayTay’s name on it in gothic and other fonts.

It’s pretty big as all Instax square cameras are. Just smaller than a CD case in terms of width and height. It keeps depth down out of use by a clever retracting lens design.

There’s a small selfie mirror on the other side of the lens from the flash sensor and exposure sensor.

However note the focus settings (I missed that). You need to manually focus between the zones. However this isn’t obvious and easily missed if you don’t pay attention to the manual.

What’s in the box & Cost

Funnily the camera’s box is surprisingly neat given the camera size. On the plus the camera comes with a strap, set of batteries and 3 colour clip on filters for the flash so you can make your shots look like you’re in hell !! However there’s no film which is tad mean. Also worth noting if like me you live in a small town getting that film isn’t gonna be that easy. Neither Boots or Argos had any in store nor did two of the supermarkets stock it.

The camera was retailing around £125GBP but currently you can buy the non Taylor Swift versions for just £99.

Like all instax cameras it is easy to load. The power switch is on the top and frustratingly right where you’d a imaging the shutter button to be. The camera is intended to be used for fairly close shooting. Therefore the Auto setting is for focusing 0.5-2m and the flash will auto fire unless you turn off.

You can turn off the flash on one of 3 control buttons on the rear. The other 2 control the modes and the set the self timer.

Of those Mode options, the camera offers the following

Now, Auto isn’t what you think it is it. It is simply for 0.5-2m shots with standard settings, No tweaking of the focus here (there is no AF system). Wanna shoot closer set macro or selfie. Want to take shots more than 2m away ? Then set it to landscape.

So you’re basically shooting the instax realisation of the Olympus XA2 but without the killer Zuiko lens.

However the EV compensation settings are irritatingly included in this mode options. This means you can’t darken a landscape shot. However the exposure tend to be okay.

The motorised lens moves to default setting (the camera resets to auto if turned off). Although big the camera holds quite well although it needs 2 hands. The front shutter button is logically placed. The off centre simple viewfinder gives you no feedback and has some parallax issues

Having spent time shooting the Diana Instant, this was a comparative breeze. That is, once you’ve realised that it is zone focused. Exposure is generally good on shots with the eception of being in very bright sunlight. Try selecting darken.

Overall this an easy camera to pick up and shoot with.

Images are reasonably sharp for the format if focused correctly. Although given the format and low spec lens not gonna rival your SLR or Contax G2. There’s a retro-ness to the images that’s quite pleasing. The lens has smidge of pincushion distortion.

Make sure you get the focus settings right otherwise long shots are awful. Although if correctly set they’re acceptable for the format.

Currently you have only the colour instax square emulsion to play with. It is available with standard white border, black border and over priced Taylor Swift edition (same as black but with TayTay’s signature printed on). It is likely at some point a monochrome film pack will arrive as with the other formats.

Currently there are just 5 cameras using this format. I’ll ignore the weird frankenstein mash ups of the Fujifilm SQ10 & SQ20 (digital with an instax printer built in).

The real rivals are from Lomography. The Lomo’instant square is the most expensive at £179 for the basic kit. It was the first proper analogue square format camera. You’ll wanna spend a bit more to get the combo kit as this allows you swap backs and use cheaper instax mini film. As well as the cute retro folding design, it has automatic exposure with EV compensation and a manual 3 zone focus glass lens. Results are good if you are happy fiddling and it’s arguably the most flexible analogue square format camera. It does require effort however and it has left some reviewers feeling nervous as it has that lomography ‘feels like its gonna break” feel to it.

The Diana Instant also hails from lomography and is a much more basic affair in some but not others. The newest & cheapest square camera on the market. It even retails currently at £89 before any sale discount. In spite of that it is reasonably solidly made and shares the same looks and interchangeable lens system as the Diana F+. It is a weird but fantastic mix. It is actually quite well build and to my knowledge is the only instax to offer full manual control. There is no metering here and it can be a devil to get exposure right especially flash. Not something so desirable at 90p a shot. But the images are classic Diana stuff. Weirdly the most controllable but potentially frustrating square format camera there is. One for the Lomographer in you and I love it despite it’s foibles

Instax mini is the cheaper format and 2 cameras stand out here from a big field. In fact it’s really just one camera the Fujifilm Instax Mini 90 (aka Neo Classic). Plus it has brilliant retro looks and with better menu choices (modes and seperate EV compenstion and a red eye option). Theres also 2 shutter buttons for ease of shooting. It cost less than the RRP of the SQ6 but is currently more expensive due to sale prices.

However you can also buy essentially the same camera but restyled as the Leica Sofort. Better looking to some and the cheapest Leica it is over twice the cost of the mini 90 at around £275. Following behind is the Mint InstantFlex TL70, a functioning TLR using instant film but it has a Leica like price tag

Meanwhile Polaroid have risen from the ashes. Enter Polaroid Originals which sells both refurbed vintage polaroid cameras and also new models. This gives you choice between a refurbed SX-70 (yup that’s basically a SLR in instant form but over £300 if refurbed by Polaroid)) or the newer one step + cameras (~£100). The latter are easy to use retro styled cameras that use polaroid film sizes which are bigger (~3″x3″) . Shame a pack of film works out at almost twice the cost per frame even with the newer I-type film.

If you want lots retro arty stuff or control I’d go lomography here and work out if the lomo’instant or Diana are for you. If you want an easy to use P&S with the the Instax square format this is the best available at the moment. Arguably geared for party shots and which does pretty well.

Bear in mind the cost factor. At around 85p a frame, more than twice the price of shooting a roll of 35mm with lab processing and prints. The cheaper but smaller Instax mini format is worth a consideration especially with the slightly more able Mini 90 and it’s Leica twin. But you get smaller prints.

That said it is no more expensive to run an Instax Square camera compared to a 120 camera with Lab D&P and prints or scanning.

That said this a fun retro inspired instant camera that does what it says on the tin. Don’t expect high end shooting but it is easy to use fun

Just make sure you remember to focus !