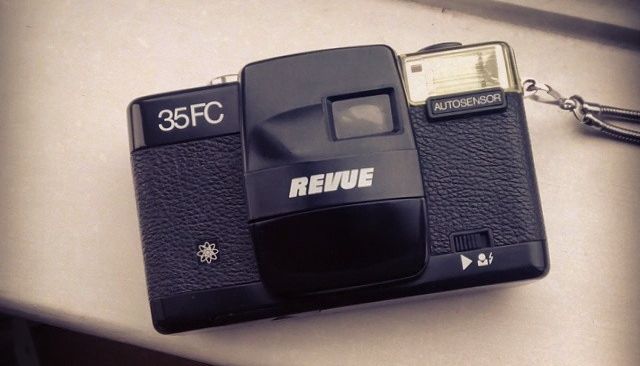 I’m in the process of doing a list of alternatives to the LC-A the original Marmite camera over on 35mmc. The LC-A is a camera most folk either love or hate although whilst I like the camera I do hate its ludicrous cost. This got me thinking about other things in film that I’m genuinely torn with.

I’d previously had this with the Olympus XA2 as I’ve blogged about already but that was down to faulty camera. But here are my Genuine issues.

Look I really want to like this camera but..
Known as the Hong Kong Lomo at first glance this camera appears to tick all the boxes. It matches the style of the LC-A and the Cosina CX2 but comes with its own USP of built-in auto flash and winder lever. It feels well enough made too.

Just a shame Haking cocked up the optics and exposure. This camera despite appearances is a fixed focus, fixed exposure flash cam with similar spec to the entry level Olympus Supertrip or Konica Pop. Now those actually are not that bad as they have a reasonable lens. The Halina doesn’t but it could pass off as quirky if it wasn’t for the exposure system. If you get the conditions right (EV100 13) it actually can take an okay quirky shot. If they had made it metered it could have lived up to the HK Lomo moniker.

Lomography (as in the company)

Like the definitive Lomography camera LC-A Lomography as a company is equally loved and hated.  I’m happy to support the company on some levels as whilst not quite the saviours of film that they can be described as they have succeeded in bringing  analogue shooting to new users and are one of the few companies that are developing cameras. And sure it is easy to critique them for being purveyors expensive plastic toy cameras in an age when you can walk into a charity shop and level with a killer 80’s cam like a XA2 for a fiver. However if you stop for a moment that’s not the point – that XA2 would cost about £223 new in today’s money¹ and was from an industrial production run – the Lomography cameras are from much smaller batches and often are package as a lifestyle add-on  with glossy books (a part I really don’t feel is needed). The company have supported the relaunch of 110 film

However it is truly hard to justify the cost of their refurbed LC-A or the new LC-A+. Lets be honest you can pick up a LC-A with no servicing on a good day for £30. Having an alleged service/checked one on eBay or sending the £30 one to Roger Lean for a CLA brings the cost to £60-70. I appreciate they might have their own overheads but I’m not sure how they can justify the extra £130 they charge. Equally I’m not sure why they’ve resorted to Kickstarter to fund new ideas. I’m also worried if I don’t like the whole retro theme am I uncool or just over 25 ?

Also known as Never-ready cases these bug the pants out of many of us. They really are no quicker than most cases in opening (my shoulder bag is quicker) and often slower. With vintage cameras it is also the risk lottery of using them in case the strap snaps due to age (or the whole case in the case of some Halina cameras). For selenium metered cameras they are a necessary evil and some do carry a cool kudos but really….

Yes, cheeky purveyors of everything for a quid get on this list. For many of us in the UK have become the go-to for film with currently Agfaphoto Vista plus on sale for a quid. But what does worry me is the impact on other film retailers and makers – there is nothing as cheap out there either on the high street or online UK sales for new stock. Even Fujifilm C200 which is basically the same stuff sells for over double the price in multipacks and most other stuff is £5 or more.

When I got back into film I was drawn by manual cameras. I love setting them up to shoot and it was a step back from the ease of the digital world’s point and shoot everything culture. But darn ain’t AF so easy and irritatingly some of the best lenses and bargains out there  come with it. You can walk into a charity shop and walk out with a major Marque 1990’s AF compact that will give excellent results and okay it might leave you feeling a tad dirty but there are times you’ll thrive with it.

The Diana Mini is an all plastic 35mm camera inspired by it’s bigger brother the Diana F+ (in turn based on the Diana cameras of the 50-70’s). And as toy cameras go on paper it ticks a lot of boxes being stylish, reasonably equipped (cable point!) and actually quite well put together. It offers quirky square (24x24mm) or half frame (12x24mm) shots which can be processed in any lab.

Look I was never expecting crystal sharp, well exposed shots from this and on a good day it does deliver those ‘dreamy’ lo fi images but… I find it a perenial nightmare to get consistent results. You get flashes of genius but then a lot of duff. I want to hate it but I get beguiled by the cuteness, the genius shots and “it must be just me”.  I’ve bought 2. Grrr….

When talking about the giants of film making it really is a tale of 2 cities. By the end of the 20th Century Kodak & Fujifilm were the dominant colour film manufacturers and in some ways still are. Both were hit by the rise of digital but have coped in different ways. With Kodak bankruptcy loomed but there was an intense sense of sympathy. This was a company that arguably gave rise to the consumer film market and tried to keep film at its heart. The resultant companies Kodak and Kodak Alaris that arose phoenix like still do place a lot of regard in film. I think we all still understand the fragility and the fact that Alaris has had to reduce the range whilst sad is understandable (BW400CN sniff!!).

Both Kodak & Fujifilm by the early 1980’s were predicting and planning for the rise in digital but it was Fujifilm that planned better for it. Both companies diversified into making digital cameras (Kodak arguably better so originally) but Kodak struggled with its business model – in the days of film they tended to sell cheap cameras with little or no margin relying on the margin from film sales to off-set. Ultimately it was Fujifilm that weather the storm better but it had become more ruthless. By 2008 only 3% of its sales were on film and in fairness to Fujifilm they probably needed to be at that level to survive. Since then however they have used mixed messages about the future of film which just doesn’t bode well. Their Execs interview in January by  DPreview  really doesn’t bode well (skip past the digital stuff). In fairness they are often the last maker of a dying stock like FP-300B or 220 or 110 (prior to its re-birth) and can seem more villainous when they stop a rare film’s production than they deserve but giving film a 15-20 year life span ..

The relaunch of Film Ferrania was something of great promise and felt worth the initial wait a bit like a pint of Guininess settling. 2 years on I ve moved house have a new job and fair few more cameras but still no potentially lovely E-6 slide film. Look I appreciate it is a new start-up, Italian/EU red tape, unforeseen difficulties but really…. Still I bet it’ll be nice when it finally arrives for my Grandson to collect (and no I’m not that old yet).

I’m now developing a small pile of flash guns, odd cables. Those little things you pick up incidentally or  sometimes even unaware of from eBay auctions. Many transient sellers of old gear will chuck in a flash unit etc. to get rid of them too (let’s be honest you can’t shift an old flash unit for anything worthwhile  unless it comes from a major brand or is a dedicated unit). It’s handy when starting out but when you’ve half a dozen Hanimex tiltable flashes it doesn’t seem such a good idea

Fujifilm C200 cloned films like AVP200 have become many a film photographer’s dirty secret that we can’t let go (the pot noddle of film if you will). This is an old emulsion that was intended for cheap tourist cameras outclassed by even Fujifilm Superia, although it does share Superia’s naturalistic tones.