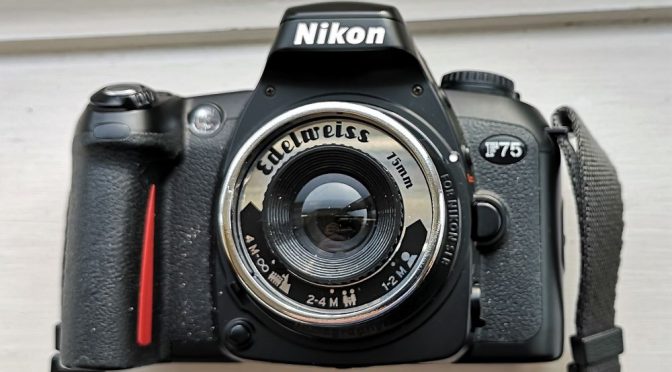 In my 10 35mm alternatives to buying a Diana F+, I recently mentioned that you could buy an adaptor allowing you to use a Diana F+ lens on a SLR.

So I got one for my Nikons to try. But is it any good ?

Launched in 2009 this ain’t exactly new. Only 2 mounts are offered for Nikon F and Canon EOS but there’s nothing to stop you sticking on another mount adaptor (say Nikon to Micro 4/3). I ordered mines from lomography but you can buy from amazon and other stores

The adaptor ring & erm…. ….nothing else. No instructions or quirky postcards.

Well erm yes (plus postage). But adaptor rings for other lens systems usually cost more. And whilst this is plastic it is well made and fits securely. Unlike some dodgy branded adaptors at least this is a company with some reputation.

So How does it work ?

Mounting the adaptor is easy. There’s an indent that lines up with the Nikon mark for mounting. The adaptor clicked smoothly into place on all 3 of the tested Nikon bodies (F55, F75 and D50).

Sadly the same can’t be said with mounting the lenses at least initially. If you ever have owned a new Diana F+, you’ll know the feeling – mounting the lens is an issue. It requires more gentle force than you think to turn the lens until it clicks into place. Lining up the mounting dot with the Nikon body mount mark helps.

So what about the focal length ?

This really depends on the lens you mount, I own and tested all 3 75mm standard length lenses (the standard, Glass premium and the wider one from the Diana Instant). And they do indeed give approximately the same angle of view as a 75mm lens on a 35mm body.

But on my D50 the DX sensor (aka APS-C) 1.5x crop factor gives you the same angle of view as a 112mm telephoto lens. This makes it a bit unweildy as you’re not expecting a good sized telephoto.

This crop factor also causes other issues which we’ll come to.

As to the other lens thing go a bit. Lomography have a slightly weird page where they give you focal lengths for them and by and large the focal length increases on a 35mm body so the 20mm fish eye for example becomes a a more standard wide 38mm equivalent for 35mm.

At least you’ll get metering, right ?

Well if this was about the Canon EOS mount you’might be right. Canon’s newer EOS mount means some camera bodies adapts to the given aperture. Nikon’s F mount requires electrical coupling for most (pre AI ones had mechanical aperture coupling) bodies

That’s just not here. But the camera will work if you shoot in manual mode on my three 21st century Nikons (F55, F75 and Digital D50)

So you can use Sunny 16, Whats the aperture ?

Nice if Lomography told you.
The mount has a aperture hole of around 6-7mm suggesting a ~f/11 if used with the 75mm length lenses and test shooting indicates this is in the ball park.

Of course that will vary with the other lenses

But at least you get SLR focusing

Hmmm…. technically you do. But to mimic how easy it is to focus this rig take your SLR/DSLR turn off the auto focus, stick a blur filter on the lens, set aperture to f/11 and hold down your DoF preview button. Oh and you’ll need hold your focuing hand in front of the lens and just focus by twiddling the edge of that filter.

It’s a dark soft mess to focus even in good light. The Diana Instant lens is the easiest to use as it’s wider

At the end of the day you can live with all that for the lens effects , right ?

Ah ! This is the real rub.
You don’t get diana camera images. There’s no vignetting or soften corners.

On a 35mm camera we’d get this

Not much vignetting there then. In fact the effective frame on the DSLR really other than some softening and radial distortion has no signature look. And that’s the issue – that’s not what you want.

The D50 shots on the Premium Lens were not bad – not as good as shooting with a Prime Nikon but results when I got the exposure on, I’d be happy from a run of the mill P&S. Really this defeats the entire purpose. And whilst the plastic lenses are gonna be softer an bit more disorted, agin it really isn’t that obvious

Although I only tested standard lens lengths. The same issue will apply to other lens (and the focal length & angle of view will vary). Take this shot on the 28mm wide lens by Tyler Wilson. This isn’t realistic as the focal length changes as well as the angle of view. However it gives you an idea

Or DX sensor (APS-C) like this. Just a soft image

Some folk have taken to sticking in vignette masks as this Flickr discussion shows.

Okay but there’s nothing else like this, is there ?

Actually there’s quite a few options. For around the same money you can buy a Holga lens with a variety of mounts. Here you get the full limitations of the lens on a mount. These are available for a wider range of analogue and digital mounts

And of course if you own a micro 4/3 camera Lomography do a set of experimental lenses.

Where you get a weird range of controls, filters as well as some pretty lo-fi fun plastic lenses including a fish eye

Sorry Lomography – the lens mount works but you don’t get the Diana experience.