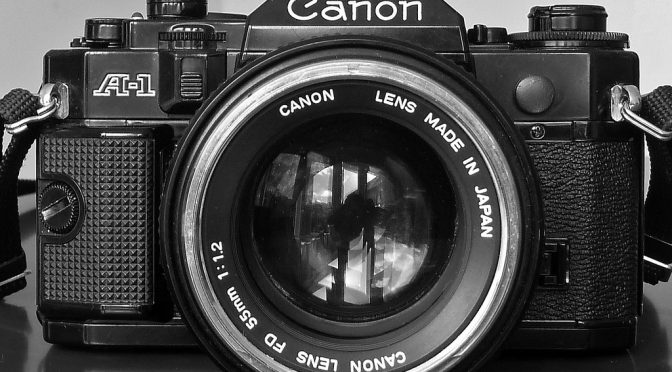 Like any technology the camera as we now it has changed many times during its life. It’s a process that continues, even among modern digital SLR cameras.

For every feature, function and design point though there was a first time. Here we take a look our first 5 of those important milestone cameras, the ones that made history, and the ones that continue to have a lasting impact on camera design in the 21st century.

Part 1 of this blog can be found here

As design moved away from manual only to offering Aperture Priority (“Av”) or Shutter Priority (“TV”) as an additional option, the manufacturers of the day were split into two camps.

Pentax, Chinon, Cosina, Fuji, Minolta, Nikon and Yashica all produced Aperture Priority mode cameras, claiming this was because it was a “better” option for users.  Canon, Konica, Miranda and others produced Shutter Priority cameras, also claiming because this mode was better than what their rivals were offering. 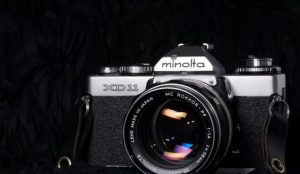 Of course, they were all talking nonsense.  The real reason all the brands rejected one of the modes in favour of the other was because it was easier for them to incorporate their chosen mode into their existing camera designs, saving them a lot of time, money and head scratching in the process.

Minolta were the first company to break ranks, producing the revolutionary XD (sold as the XD-11 in the US and the XD-7 elsewhere).  This offered Manual mode, Aperture Priority, and Shutter Priority.

For various reasons we can never quite fathom, this camera was never really a commercial “hit” but speak to anybody who was serious about photography back in the 70s and they will tell you what a truly great camera it was.

Why force yourself to have to choose between Av and Tv at the point where you are buying your camera, when there is going to be some situations where you need one mode, and others where you need the other!? Well, after 1977, you had to choose no longer.  As with all the cameras on this list, other manufacturers had to jump on the bandwagon, or risk serious losses to their business.

Hot on the heels of the Minolta XD was the Canon A1, which took things to the next level.

The answer…..well, there was no reason!  Canon worked this out first and in 1978 launched the Canon A1.  It came with Manual mode, Av, Tv, and the new fully automatic, or “Program” mode.  If you wanted you could just point your camera at something, fire the shutter, and the camera did the rest.  We take that for granted now, but 40 years ago it must have looked like witchcraft! 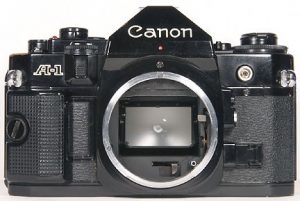 The Canon FD lenses that are compatible with this camera are legendary for a reason, so the camera was incredibly popular. It opened up a whole new audience to the world of SLR cameras.  No longer could “I wouldn’t know how to use it” be an excuse for not owning your own camera.

This little gem could make a claim to be the single most important camera on this list, although owners of an OM1, a Spotmatic or Ashai Pentax might argue otherwise of course. 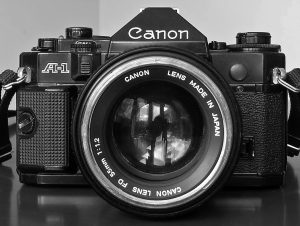 If you want a camera that gives you the choice of shooting in fully automatic mode, without having to sacrifice manual mode, then this little piece of history would be a great place to start.  Plus you can impress (or perhaps bore!) your friends with the story behind the camera as an added bonus.

Within a few years other cameras from other brands overtook the A1 in terms of features, design and reliability.  But no other camera could claim it was the first fully automatic SLR camera.  The A1 can.

If you’ve never used a film camera before you might struggle to believe this, but there was a time when you had to focus the image yourself.  It wasn’t always that easy to get perfect either, especially in low light or in a busy scene.

Imagine, they said, if the camera could do that for you?  Well, those clever boys and girls at Pentax worked out a way that it could….Well, sort of.

Rather than start with a blank sheet of paper Pentax looked at incorporating autofocus into a re-design of one of their existing cameras, the Pentax ME Super.  Without getting too technical this “only” involved significant alterations to the lens mount, with the rest of the autofocusing technology being in the lens.  No longer did you have to spend an age trying to get your focusing right, only to realise when you got your prints that your efforts had been entirely wasted. 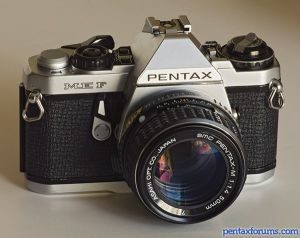 The camera was a flop.  Pentax only produced one lens that was compatible with the camera, and that was a zoom lens.  This lens needed additional AA batteries to run it, making it heavy.  The autofocus mechanism was rather primitive too.  If you used it today you would laugh at how long it would take to get the focus right (or at least what it thought was right!).  The noise it produced when focusing was rather laughable too. 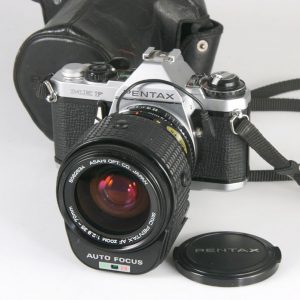 Given they were paying somewhere close to £2000 in today’s money for the camera and lens together, people weren’t happy.

Other companies soon worked out that Pentax had got the mechanics of the focusing wrong, and that more radical alterations to the camera body were needed to make autofocus a success.

Some people feel Pentax never really recovered from this flop, having put so much time and money into this technology only to see it rendered obsolete within a year of hitting the market, but that’s another story.

Whatever the problems with the camera, it remains a piece of history nonetheless, and still worth owning and using, given the LED focusing assistance you get through the viewfinder, even when using manual focus lenses.

Anybody who has shot with film will know that shooting in situations where you have contrasting light is a nightmare.

Take this example – you’re shooting indoors in a not particularly well lit room.  It’s a bright day out and there’s a window behind your subject.  Because meters typically take an average reading for the light across the whole scene (with a bias towards the centre) the meter will often think it is lighter than it is where it’s dark, and darker than it actually is where it’s light.

The result – images where you subject is too dark to even make out, and a bright white light lacking any detail at the window, particularly if your subject is off centre.

Just like they had with the OM1, Olympus came up with something truly revolutionary.  It’s something included not only in all digital SLRs today, but something that comes to us all naturally when using the camera on our phones. 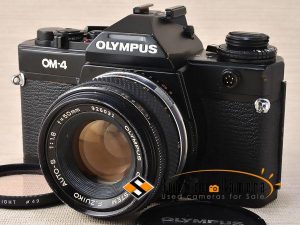 This new way of metering on the OM4 enabled you to select up to 8 different points in the scene, which the camera would then take an average for.  The camera could then apply the settings needed to get the right exposure.  Quite how they managed something as complex as that in 1983 baffles us to this day, but they did, and they did it oh so well.

If you can afford it – they don’t come cheap! – this remains probably the most intelligent and comprehensive manual focus film SLR camera you could lay your hands on.  They are an absolute joy to shoot with.

The fact Olympus were still making this, a manual focus camera, well into the autofocus era – 2002 to be precise – tells you what a gem this camera was.  And that it still is.

Whilst other brands, including giants like Nikon, were trying to make autofocus loosely based on the Pentax ME F school of design – and wasted a lot of time and money in the process – Minolta were the first to work out this wasn’t the future.

In 1985, after a lot of hard work, they launched the first successful autofocus SLR, the Maxxum 7000 (Great name we think….sounds like some sort of weapon from an 80s sci-fi film). 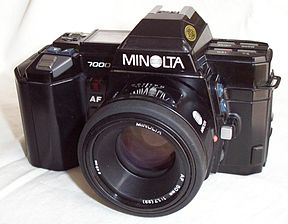 This camera went on to be the bedrock for all future autofocus SLR cameras.   Crucially the focusing was driven by the camera, not by the lens, which was the downfall of the Pentax ME F.  This meant the new autofocus lenses could be smaller and cheaper, not to mention better at doing their job.

You might wonder why Minolta isn’t a brand you know much about in today’s camera market.  Well, in 2006, having merged with Konica in 2003, they sold the camera part of their business to Sony, who continue to use their A mount system for their digital cameras and lenses to this day.

So even if you don’t see many of these any more, it’s legacy lives on.