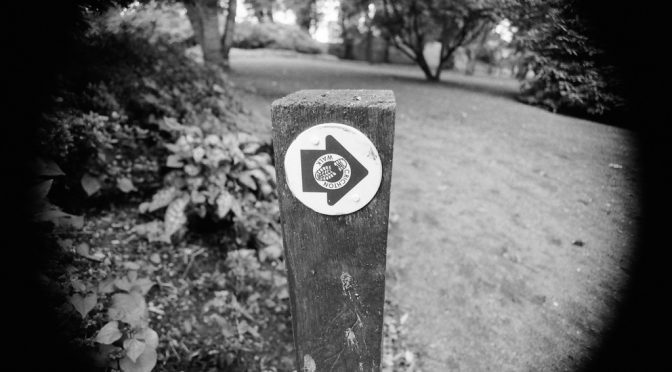 Stick a cropped sensor digital lens on a film body ? What could possibly go wrong. Thanks to me recently arrived Nikon F75 we actually have the chance to do this and if you like your shots with a lo-fi slice but with good gear this might just be up the street for you

Nikon’s backward and forward compatibility is the stuff of legends. The F mount was first used on their SLR cameras in 1959 and is still in use almost 60 years later. A pro level Nikon Df dSLR will support and use some Manual focus F mount lenses made in 1959. Equally a Nikon F from 1959 will still be able to use some of the lens made today for AF dSLRs. Even the recently launched Nikon MILC cameras (Z series)  that use a new Z mount, can use some lenses from the 1959 via an adapter.¹

But the Df and the Original F are pro level legendary cameras of their eras. More humdrum cameras don’t always offer the same support due to changes in technology.

That support can vary depending on the lenses with many AF film SLRs and dSLR  not supporting metering with older MF lenses whereas ironically MF film bodies post ’77 will do just fine with AF lens (unless G lenses – the ones without an aperture dial).

Anyway let’s get more up to date. In 1999 Nikon launched the D1, a flagship dSLR and one of the first practical dSLRs. Unlike many later pro level Nikons, this didn’t have a full frame (i.e 35mm or as nikon puts it FX) sensor. It used a smaller cropped 24x16mm sensor  about the same size as APS-C frame. They called this the DX sensor and DX sized sensors remain the mainstay of Nikon’s consumer line up. DX sensor cameras are quite at home using full frame lenses. You just need to remember the (x1.5) crop factor. So  a 50mm lens on a DX body equates to a 75mm lens in full frame.

So how about the other way ? These have shorter focal lengths so my d50’s kit Nikkor DX AF-S 18-55mm 3.5-5.6G ED lens  on paper offers an ultra-wide angled lens for peanuts for a full frame camera. A full frame AF 18mm Nikon lens  would cost the same as my D50, my 3 AF Nikon film bodies and most of my AF lenses together.

So is this a bargain way to shoot ultra wide ? – yes but with some massive caveats.

Firstly DX lenses are all also G class. Often nick named G for Gelded – these lack an aperture control ring making them useless on most Pre AF bodies. Now in theory that should be the only issue. But heck my AF film bodies will be fine ? My F55 and F-401 just failed to work.

Now you might say that’s down to the AF-S. Ignoring the weirdness that is the F3AF lenses, Nikon’s original AF lenses use a motor build into the camera to power them via a screw slot on the lens. These lens are widely available usually with the later AF-D revision. AF-S lenses arrived in 1992. Here the motor moves from the body into the lens with several benefits. Now these were originally high-end so many lower spec camera like the F55 were unlikely in the day to see a AF-S lens so AF support wasn’t built-in. However AF-S lenses should work with manual focus on the F55 and meter fine. Except my DX one just didn’t. Likewise the F-401 predated AF-S but again  is felt to be compatible without AF according to Ken Rockwell’s  compatibility guide. Again no dice !

I can’t explain why. However my F75 worked as it should. As it’s a AF-S supporting camera that included AF support. And yes AF and exposure were all on the money in most shots.

DX lenses tend to vignette quite badly. Weirdly on the tele end of things (Did I just use tele for a 5mm length lens ?) you hardly saw it. You could get away using this although there’s a tad softening in the corners and  the lens only opens up to f/5.6.

At the 18mm end you get circular vignetting. Granted this is no Fish eye lens but the closest I’ve seen to this is with Lomography’s plastic Fisheye One camera. Still the Nikkor lens is a hell of a lot better technically and images are pretty sharp especially centrally.

It really is one for a digital DX camera user unless you like letting your lomo side out !

I can’t really comment on how this works with other DX lenses but there is a common them of vignetting usually worse at the wide end. 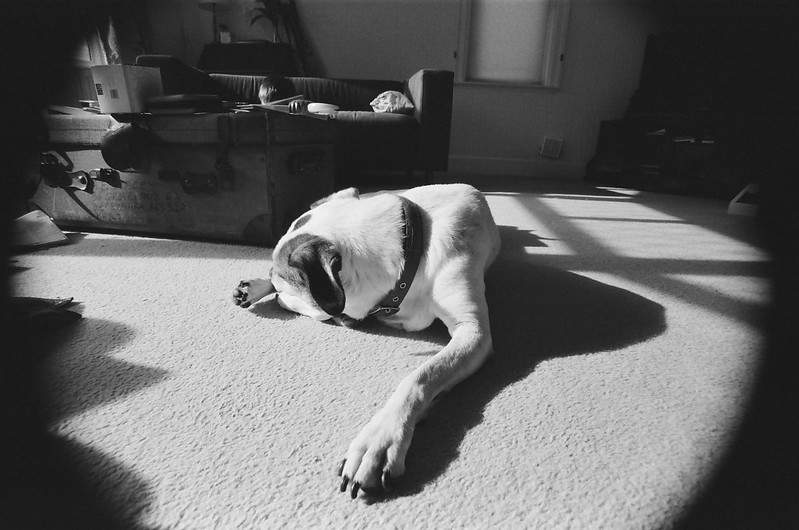 ¹ Some older Nikon lens can cause mechanical obstructions on otherwise compatible camera. Ken Rockwell’s guide listed above is really helpful.