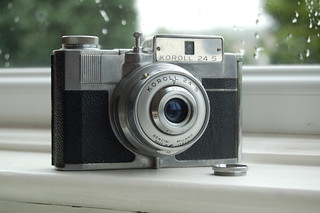 This quite gorgeous lump of Aluminium hails from 50’s Italy. It’s a pretty basic 120 film camera from the era but has a couple of trump cards to play.  It’s first trick is that it’s a half frame (3×4.5cm) camera allowing you to take a whooping 24 shots on a roll of 120 film.

The second (and unintended) thing is that it’s probably the easiest 120 film camera to mod to use 35mm to get sprocket. Its film sockets snugly fit a 35mm cannister and unlike some other basic cameras of the era it has a flat film plane . This allows you get a sprocket effect on 35mm film abet only 30mm wide.

It’s specs are pretty basic and potentially quite limiting. Clearly in the 50’s 100asa must have been pretty fast !! The camera is probably best suited for 50asa in Sunny conditions such as ilford Pan F+. There is no metering so you’ll need to use a hand held or your brain using sunny 16. It was an improvement on the Koroll 24 which just had one aperture of f/11.

There is a PC sync for flash with a cold mount point on top. The screw in filter size I have no idea. The simple lens set up has scale focus and that’s about it…

It’s quite a distinctive camera and it generally works okay given it’s age. It loads as most 120 film camera using the last film’s spool (probably will come with one but if not ask your lab or at worst can be bought ebay). You basically wind roll film onto the empty spool as you use. It has double film count view points on the rear due to it’s half frame nature

It’s lens is not the the best and will give a soft focus with lower contrast most noticeable at distance and at f/9.Focus best in centre of image.

Not a particularly sought after camera. With bit of luck should get for tenner or less on ebay. They seem to be prone to the focus seizing (I bought 3 before I got one that worked) so do ask sellers or make sure have a return option

Make sure you get  with the original aluminium screw lens cap. Occasionally they come up with dedicated filters. There isn’t any light seals as such so maintenance really is around cleaning and keeping lens moving.

You should  also make sure you get one with the little  Worth noting my original working one shutter spring blew but I was able to unscrew the lens housing (2  wee screws accessible from inside the camera) and transfer to the body of one with a jammed lens.

Bencini made a range of Koroll  camera during  the 1950s-1960s but only the Koroll 24, 24s , II and III shot half frames. The II & III had better shutter speed and aperture choices which might make them more useful choices.

I can’t comment on the ability to put a 35mm roll in any other Koroll but if you google it you’ll find other folk who have.

It’s plus isn’t the optic or specs. It is the fact you can shoot 24 shots on a 120 roll and it can easily double up to do sprocket shots with 35mm making it a canny abet limited choice.