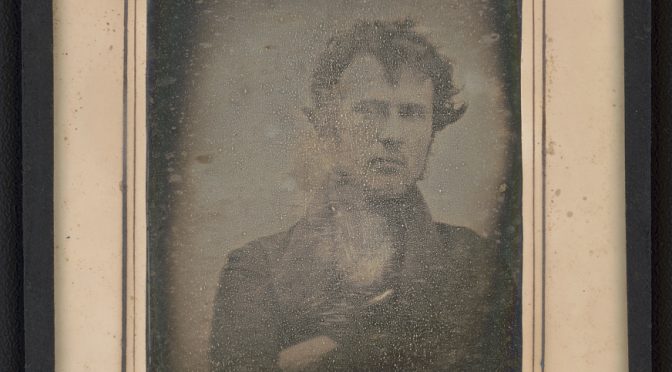 This is  my take on the history of photography from the earliest days to now. In slight hommage to Neil MacGregor’s seminal  A History of the world in a 100 Objects, I’m going to do this by using actual objects that still exist in the world. We begin with the first self portrait  (aka a selfie)

Unlike Neil McGregor, I’m not doing this chronologically as (1) it allows me some editorial flexibility (2) there’d be a about a month’s worth of certain US company beginning with K in a row. But we begin going back to 1839 to a quite ground breaking photo. 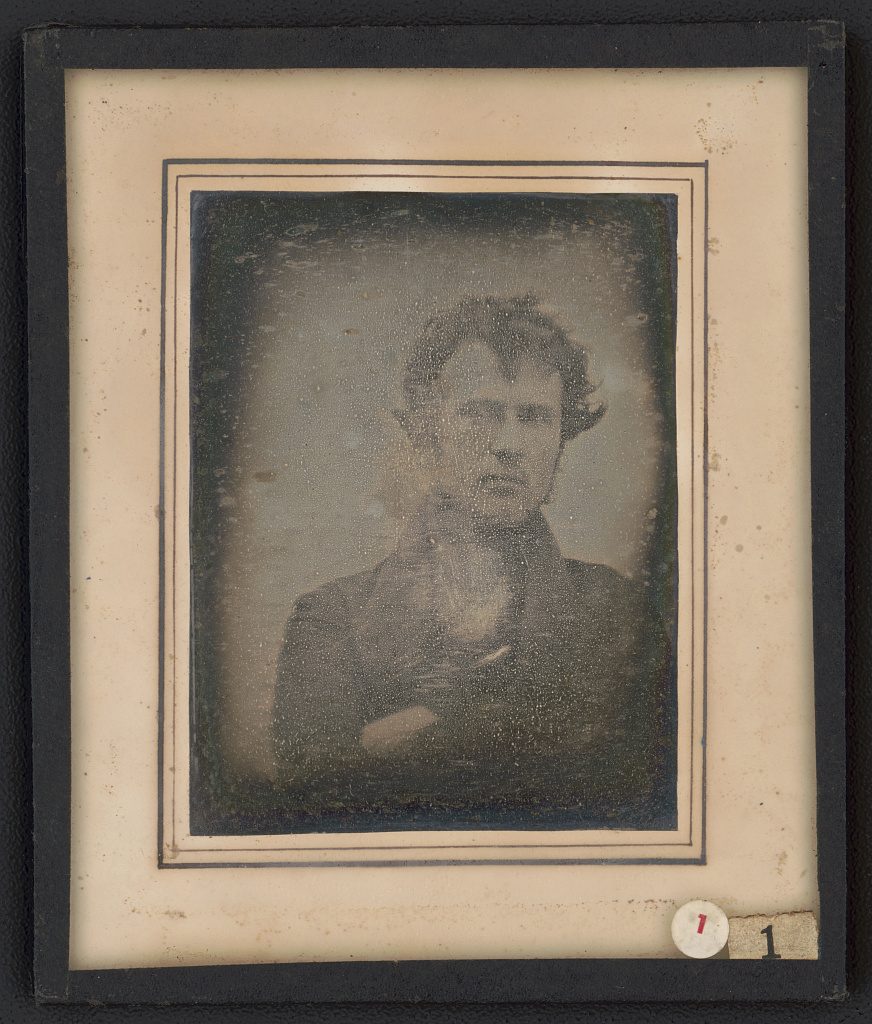 The subject is one Robert Cornelius. He was a thirty year old from Philadelphia. This isn’t  just the earliest known selfie. his photo is also the first portrait photo and the first known intentional photograph of a human.

Robert had trained as a silversmith and his skills brought him into contact with early experimental photographers using the Daguerreotype technique. This peaked his interest and he set  out to perfect it for himself.

Developed by Louis Daguerre (in part in conjunction with Nicéphore Niépce),  Daguerreotype is one of the earliest photographic processes. It uses a mirror finished sliver plated copper sheet which is treated with  iodine fumes (later bromine fumes) to create a layer of light sensitive silver iodide (or halide). This sheet needs to be exposed for some time to form an image. Although the process would improved – it’s estimated Robert would have need to sit still for  3-15 minutes to achieve his image in 1839. This probably gives him the accolade of the first photographic numb bum.

Although the  Daguerrotype process would improve, this is the first documented intentional use to capture the image of person. Daguerreo had unintentionally photo graphed 2 people with his 1838 shot of the boulevard du Temple. Most figures and vehicles are absent due to the 10 minute+ exposure, bar the lowly shoe shine and his customer in the bottom right.

Robert built is own box camera using an opera glass as a lens to take this shot in his family’s backyard.

Although we think of Selfies as modern invention/curse, there’s actually a long history of photographers capturing themselves in photographs. With long exposure early techniques,  it was easy enough to nip around for a ten plus minute exposure.  As techniques improved and shutter time dropped.  Pneumatic squeeze bulbs existedfrom the very early days and would The Bowden cable developed in 1896 as well as providing brakes on most bikes would be used to make cable controls for cameras. Other innovative solutions were a also found. In 1902 Fairie Manufacturing Company patented the lit fuse autopoze self timer (yup adding Z instead of S is soooo 1900’s). By WWI Kodak were certainly selling a self timer. The mechanical self timer on camera would follow and by the 70’s electronic self timers arrived.

As I type this in 2018 no self respecting mobile phone would be without a front facing 2nd camera. And this is purely for the purpose of selfies.

Robert Cornelius would capture the Zeigiest for Daguerreotypes and would go on to found two of America’s first photo studio. He managed to live well into his 80’s having retired 26 years previously and with no snapchat filters. Lucky him…

Google estimated over 24 billion selfies were uploaded via android phones to their servers last year !