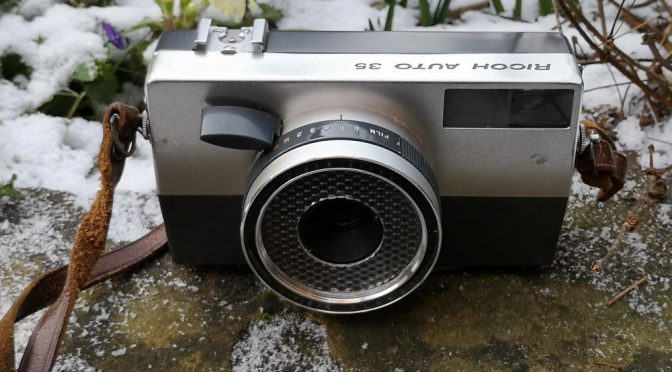 The 1960’s was the decade that Japan transitioned into the worlds major Camera maker usurping the century old strangleholds of European makes. It was a also a period of rapidly changing camera design with increasingly compact & futuristic designs. But is Ricoh Auto 35 Enterprise class or space junk ?

Ricoh remains one of Japan’s few camera producing companies. Operating under both its own name for compacts and the Pentax brand for dSLR. But Ricoh has one of the most fascinating histories of any of the Japanese big makes.

Today academic institutions frequently take the fruits of their research and launch their own companies to profit from the innovation. But Ricoh was a product of such thinking 85 years ago. The Riken Research Institute remains one of Japan’s key research bodies. Founded in 1917, the Institute realised the potential to use its research for commercial gain which could be re-invested in research. So in 1927 they established the Riken Concern. This conglomerate at its peak in 1939 had 63 companies and 121 factories.

So Ricoh starts life as Riken Kankōshi K.K. , the photographic paper division in 1936. But the company would begin to move into camera sales the following year. The company would develop over the coming years cutting its ties with the Riken Concern & the Institute in 1942. By 1960 it was not yet fully trading as Ricoh (that would come in 1963.) But Riken Kōgaku Kōgyō as it was known had been producing cameras under the Ricoh moniker from the WWII days.

Now the company had enjoyed some success in the Japanese TLR boom of the 1950’s. They also had some well regarded 35mm models by 1960.

But the Auto series are very different.

Our subject was the first – fixed focus with automatic exposure using the cyclops selenium array seen on all models. Launched in 1960 and soon followed by the zone focus Auto 35V in 1961 intended just for the Japanese market. The third model was the most advanced and remains the best known today. The Richomatic 35 is a coupled rangefinder. Oddly if you were Japanese it was hard to get as it was for the export market only.

A measure of success of the Ricohmatic 35 and the Auto 35V, was their copying by the Soviets. KMZ made them as the Zorki 10 & 11 respectively. Ironically KMZ won the Gold medal with their Ricohmatic 35 clone at the 1965 Leipzig World Fair.

At its core this is a fixed focus 35mm viewfinder camera with a Riken Ricoh 40mm 1:2.8 3 element lens. This couples to a selenium driven auto exposure system using a trapped needle mechanism.

In General use you set the camera to one of 5 settings to match your film speed. So Setting 2 is the slowest for films 10-16 ISO and 6 being for the fastest films (160-200 ISO.) You probably spotted there is no 1 setting (go figure !). Essentially you fix the speed of the Seikosha 500 shutter in this mode. Speeds for settings 2 to 5 are 1/25, 1/32, 1/50, 1/100, 1/160 respectively. The meter then adjusts the aperture to match the conditions. My model has the film speeds listed on the back but the version shown on the camera collector forum lists film types.

There are 2 other speed setting. You get a bulb (B) and M for using flash bulbs (fixed at 1/25). Sadly this camera syncs for medium speed bulbs. So no joy with simply hooking this up to a electronic flash via the PC sync socket. Unfortunately it’ll fire the flash before the shutter fully opens.

This M mode is intended to be used with a weird aperture control setting on the underside of the lens. Weird, as rather than put aperture settings down, it puts distances in feet & meters. Luckily the manual (available as ever from Mike Butkus) translates this for you. So you get AUTO (default setting), 8m (f/4), 4m (f/8) and 2m (f/22).

Almost all metal body with 2 tone construction. This is bar the plastic on the speed dial and as cover on that gorgeous shutter switch. Below on the base you’ll find the Film Counter and the Triggermatic film advance lever. You get this on a few cameras of this era and I don’t like it. Despite Ricoh’s claims it doesn’t make it easier to wind on. Thankfully it died out by the end of the decade. But it does fit the design well here I must begrudgingly concede.

The Auto 35 is well built stuff. In terms of issues, watch for the metering needle system gumming up. I own a Ricohmatic that suffers from that.

Brightframe lines with a needle scale at the bottom. It is quite hard to see the needle except when over the red low exposure warning zone. It does not lock the the camera from taking the shot.

To load you pull down small lever on one end. Film loads on the right (so cartridge sits other way up to usual). There is a single slot on take up spool. You advance by the triggermatic system described above. As discussed, you set the ISO by matching the film number

Point and shoot in use. You wanna watch the needle meter at the bottom of the viewfinder. If in red check you’ve taken the lens cap off but otherwise don’t shoot and look for better light (or track down M class flashbulbs). The camera will not lock if underexposing. The viewfinder is off centre but has compensating framelines

The Shutter pings in use

Frame counter counts up and is on the base along with the rewind system. Although the lever for this is a little different this is a typical depress button and rewind system.

The camera broadly exposed okay, maybe a little under exposing but it is ~60 years old. I lost the first 10 shots on my first roll which I suspect was loading issue as the remain 24 shots were fine as were the second roll.

Optically there’s good and bad news. the camera is quite sharp at close distances. It is a bit softer on long shots. Still acetable but this lacks the sharpness you get with some fixed focus cameras like the PEN EE-2.

It also falls off a bit t the edges and there is some pincushion radial distortion evident. Vignetting becomes evident in bright light when the aperture is forced small.

Final Thoughts on the Auto 35

In brief this Gorgeous styling meets so so optics.

Still looks fantastic today but optically it is limited. It’s not awful but definitely the weak one of the three.

This is a very early automatic P&S but there are better. As I’ve mentioned the half frame Olympus PEN EE series which launched just a year after is way sharper as a fixed focus number. The Fujica Automagic 35 is also another early automatic P&S which offers a more limited exposure system but sacale focusing is worth considering as an alternative. That’s if you can live with the more prototype looks.

As mentioned Mike Butkus has the manual on his site. There is a 5 frame review of using the camera in manual mode on 35mmc. Camera-wiki as ever provides information and a good list of links about this camera