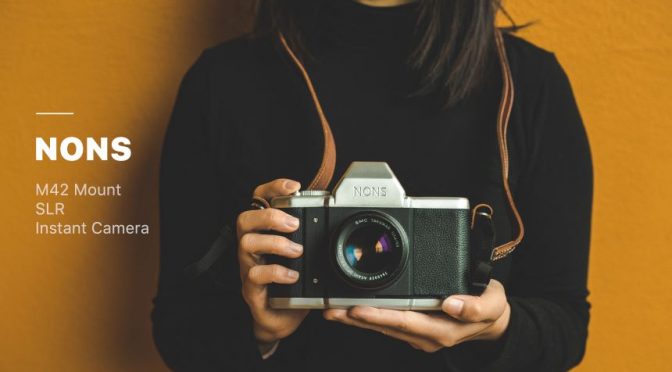 Earlier this year Nons launched one of the more interesting analogue camera Kickstarters that I’ve seen. The SL42 is an interchangeable lens mount SLR that uses Instax instant film. The company have updated backers with some mixed news this week. Which means we’re gonna see this quite soon, with new good features but one major problem.

“To say that Crowd Funding has been a fickle mistress to the world of film is probably an understatement. It has been a path paved with good intentions and designs but potholed by over ambition and with some real conmen standing on corners, It is a damning indictment that the most advanced 35mm camera that actually made it was the mediocre rebooted Yashica MF-2 Super.”

The trouble with Film Cameras & Kickstatrter

It’s not that there haven’t been cameras that should have broke the mould. Reflex which promised a modular mount SLR with a young innovative team. But it remains in development hell 2 and a half years after the units should have been delivered. The Ihagee Elbaflex which was a re-booted camera. That was being made by folk whom erm … used to make that cameras. But it failed to get funded. Probably just as well as it was caught up in the whole Meyer Optik scandal.

But elsewhere there were more promising noises. Ignoring Robert “why don’t you talk to your backers” Hamm’s NuBox 1, things have been a bit more positive for bigger format launches with the likes of cameradactyl.

But one type of camera has really thrived here. There’s been numerous models from Lomography, camera backs, Cardboard cameras, point and shoots & quirky Japanese weirdness. There’s even a couple of TLRs (including a Rolleiflex) .

That format is Instax.

So what do Nons Bring to the table ?

Irrespective of format this was big news. The only real film SLR in production is the legendary beast that is the Nikon F6. That’s arguably the high watermark of film photography.1

Nons will be the only other system film SLR in production. And the good news is their latest update indicates it should start shipping by September.

Nikon will not be losing much sleep over this as this is very much for the Lo-Fi enthusiast. The camera uses an existing common 35mm lens mount (more on that in a mo). But it uses Instax Mini as its medium. It’s an innovative idea although as there is no optical modification in camera you get a quite vignetted image. That’s because an instax mini frame size is 62×46 mm. That’s almost twice the size of the 35mm frame (36×24 mm).

To optically correct you’d need a bulky bit of kit like the the Instant Magny 35 Kickstarter which allowed you to replace your 35mm camera film door with a optical device that would focus onto an Instax square carrier. It was pretty bulky but worked (largely a 21st century re-imaging for Speedy Magny polaroid back for Nikon).

But this is much neater design. It is still oversized looking more like a Pentacon Six. Spec wise its a pretty basic camera with what sounds like an uncoupled metering system and a mechanical shutter. The metering was added during the campaign. It remains unclear if this is TTL or external but I’d plump on the latter.

The SL42 as the name suggests started life as the name hints as a M42 mount body. This made a lot of sense. M42 lenses are plentiful and can be sourced cheaply & there a vast array to pick from. From legendary Pentax Super Takumars, Soviet Helios with their swirly Bokeh to a host of others.

But the company started to talk about an optional passive EF mount (the mount used on Canon EOS) camera. The company have now confirmed that the optional EF mount is now standard

But that’s a good thing !

A passive Canon EF mount initially sounds weird. You wouldn’t really be able to do much with an electronically controlled EF lens. But a EF mount is one of the widest 35mm mounts in the business. This makes it especially suitable to use adaptors. So you can mount not just M42 lenes but a host of other glass. This makes the camera more flexible to me as I have erm… at least one or 2 Nikon lenses and a few K mount.

So yeah ! more glass options which is a good thing and will let me try some vintage Nikkor glass on Instax.

Tucked at the bottom of the Production update was this

“We determine to cancel 1/500 shutter speed function in the final product, since the unstable performance after hundred rounds of shutter module test. We apologize for the defunct of 1/500 shutter speed, and will offer one free strap per camera as compensation for every backer“

Now I’ll let that sink in and just mention Instax is a 800ISO rated instant film type. A film type with a latitude that makes most digital cameras from 2008 think they’ve actually got a dynamic range.

Now in fairness the team are apologetic and rightly point out my lens could used some shades (i.e ND filter). I also live in the West of Scotland so EV15 weather is not the norm. It is also good they have made this decision after stress testing the shutter rather than send out a defective product. But..

Just a bit of an dampener to what should be an interesting product. But this will still be the only other in production SLR after the Nikon. So I’ll dust down my ND filters if the Scottish weather doesn’t live up to mark as I’m still keen to get this out there,

1 Before some of you moan, yes Lomography brought us the Konstructor. But that isn’t a system camera and has a fixed lens with limited features(no pentaprism/mirror fixed shutter speed). It’s a great concept but not a fully functional system SLR