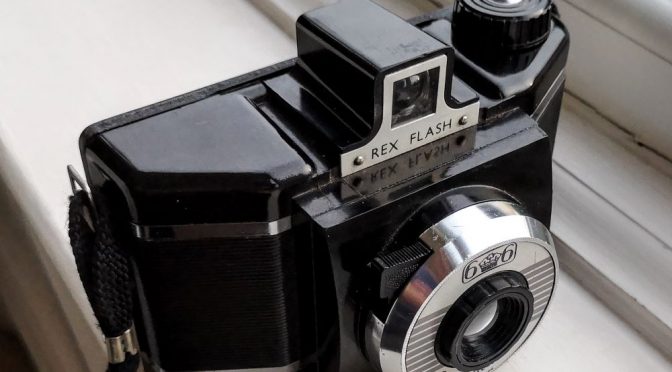 Launched in the 1950’s the Coronet 6-6 was yet another no frills Bakelite roll film camera, But the folks at Coronet decided to re-brand this camera as the Rex Flash. But is it King or just Flash in the pan.

Coronet was founded in Aston, Birmingham in 1926. In its relatively short 41 year life the company produced a vast number of cameras (by 1933 they’d made over half a million). The company produced low end box or folders and their products are relatively easy to find today. They were notable for their Links to Standard Cameras Limited whom we’ve seen before for the Conway Popular. In fact the 2 companies often seem to share parts (to me not a good sign). The company also set up a partnership with Tiranty of Paris to circumvent French import restrictions.

The Rex Flash is a curious camera not just because of the re-branding. Both it and the original 6-6 shoot 6-6cm negatives on 10 film. To us the 6-6 makes sense but this is 1950’s Britain where Imperial measures still hold sway. I daresay that the Coronet 2 1/4″- 2 1/42 just hasn’t the same ring. I also suspect it was Coronet’s attempt at looking all grown up to use the continental metric measures.

Even more curious is the link between these and the Coronet Cadet and it’s rebrand the Flashmaster. These essentially the same cameras bar angular lens housing and shorter focal length. things get more confusing as the Rex Flash has Flashmatier on the lens. More Bizarrely you can find versions of the cadet that look more like the 6-6.

And it get better you can find Rex Flash cameras that look like a cadet !!!

At the end we have a nice looking Art Deco styled simple camera made of bakelite. It’s obvious comparisons are the likes of the Agfa Click, Ilford Advocate or the Kodak Brownie 127. Like those it shares a viewfinder reminiscent of those you get for rangefinders when using different lenses. There’s a set of sliders on the sides like a Holga 120 to open the metal film door.

The 65mm lens is a simple affair. Fixed focus and likely meniscus. The aperture is fixed as is the shutter. No definitive spec exists. Richard Kaye speculates on a ~1/60 and aperture of f/13-14. Meanwhile Art deco Cameras suggest a 1/35 & f/16 setting based on measurement. I’m inclined to believe the camera would have been made with a faster shutter which may have slowed (Art Deco cameras measured it). It’s highly unlikely even in 1950’s that a shutter speed of 1/35 for a 65mm lens would be likely. However in yet another Curious, twist these 2 options are broadly the same EV100 value.

The back is metal and comes off with the whole film holding apparatus. This actually makes it much easier to load than many a box camera. There’s a red window and a simple shutter switch. And erm… that’s almost it.

I say almost as there’s a pair of slots terminals for the flash. I suspect this is a vintage standard but pre-PC sync isn not my thang. They are irritatingly the same width but just slightly narrower than the prongs of the Diana F+ flash.

The camera is a bit unwieldy but actually comfortable enough to shoot. There are no controls and the viewfinder is spartan and small

The alarm bell should have rung now that Coronet and Conway shared features and parts. To be fare the lens here is better than the popular but not by much. The shots benefit from a little post processing as are shown here. There some barrel distortion but no worse than you’d expect.

It’s pretty soft and noticeably so at the edges and if your subject is more than 10 meters away. This is a camera from the 1950’s but yet my Brownie No 2 which was launched in 1902 takes better shots and has more features. It also was cheaper to buy comparatively new and in today’s second hand market.

I suppose there’s some Lomo charm here but this camera costs the same (around a tenner) as a second hand Diana F+ on a good day which offers so much more capability. You can also buy an Agfa Click for the same amount and that whole lot better

This camera looks great with Art Deco retro style. But really unless you’re the most ardent of Lomographers, this needs to sit on the shelf. Bad lens and non controls do not make a good camera. You’re film choices and shooting mode are gonna be limited at around EV100 13