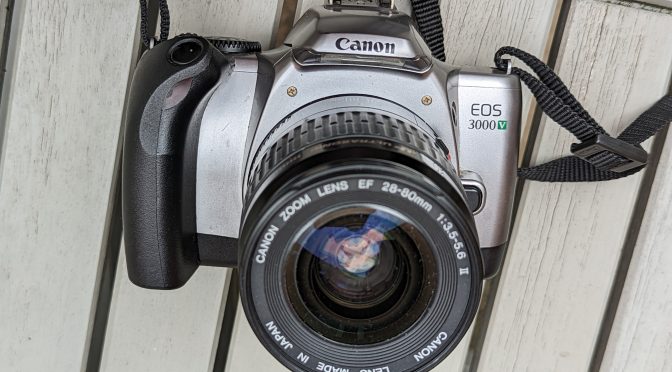 Amongst the last ever designed film SLR, the EOS 3000V is often ignored in favour of more esteemed siblings. But that might be a shame. Whilst it’s no classic, you can get an incredible amount of tech for a few quid.

Launched in 2003, this was third EOS 3000 model each of which was an incremental improvement. Those upgrades were designed to stay ahead of the competition. By competition we really mean Nikon who finally a brought their A game back to play in the 2000’s. So we’ll compare this against the Nikon F55, the period rival

It’s branded the EOS Rebel K2 in the US and in Japan as the EOS Kiss Lite.

At it’s time of launch Canon were probable more worried about what Minolta or Pentax were doing. That’s because the Nikon base model of the day was the F60/N60. That was still using the same crippled Nikon Advanced AM200 module. This turned up in the mighty Nikon F4 a decade earlier and was cutting edge for a brief moment. It however served all of Nikon bottom rung SLR following it up to the F60. But unlike the F4, the F60 and it’s predecessors couldn’t use faster AF-S lenses.

It was a design improvement however for Nikon however and was the start of them getting their sh*t together. As Ken Rockwell describes it’s “a poor copy of the Canon EOS Rebel 2000” .

But Nikon next series of models, changed the game. These are of course a bit more mid and high with the like of the Nikon F100 (N100) and F80 (N80). But the F65 came in as the mid range model consumer model 2000. It had the improved ergonomics and useability of the F60 but added a much better focusing system and AF-S support.

The 2002 3000N is a small incremental improvement. Designed to stay in touch with rivals. The first model in the series sold in the US as Rebel XS N commonly with Date (Data Back) suffix.

Tellingly the Nikon F55 was launched that year too. Massively improved over the F50, it would match the 3000N in many areas with some advantages but also one major disadvantage.

And that might explain the 3000V arrival in 2003. This was a much more massive revamp radically overhauling focusings and metering with the same core system seen in more high end models

As we’ll see it gives it considerable advantages over rival budget models but there are some issues. They really went all in though and the camera works out with about 90% of the capabilities of the higher end EOS 300X.

Looking front end this another Noughties plastic 35mm Film SLR, not radically different from it’s predecessors. And indeed much is similar. You have Canon’s signature vertically aligned command dial sitting by the shutter button. There are only a few other control buttons by and large logically placed although as we’ll see there are one or two issues. But the first clue to the radical design change, is the otherwise fairly normal mode dial sits on the same side of the camera as the shutter button where the top plate LCD usually is.

That’s because like the EOS 300X, there is no top plate LCD. Instead you get a bigger rear LCD. It’s a bit of jump to use and will be a marmite point althougth you do get used to it whether you like it or not.

The camera only seems to have been sold in that naff Silver lack typical of the time. The mount plate is plastic too. The F55 shares those naff design features too.

What is striking is the similar if not same set up as the 300X and even the EOS 30 series models. It basically pinches the 7 AF point TTL-CT-SIR with a CMOS sensor system. You also get a 35 zone matrix metering system. Shutter speed hits 1/2000 and goes down to 30 sec in 1/2 stops with the ability to put the camera into Bulb mode. Oddly the data back date version lets you use a wireless remote release but not the standard model.

The Nikon F55 shares those shutter speeds. It’s Multi CAM -530 module is a massive improvement over the older AM200 unit . But it gives just 3 AF points. Metering is just 5 zone but is the legendary Nikon 3D 5 zone matrix. This was cutting edge in its day & still preforms so well. I’d argue is still a good fight against the Canon.

Bracketing and EV compensation are available (up to 2 stops ±).This is the same as the NIkon.

The mode dial has the typical Canon divisions of Creative and Basic zones. Creative has the standard 4 PSAM modes (although Canon call Aperture priority AV and shutter priority Tv). Plus you get Canon’s clever automatic Depth of Field mode. This is used to keep subject and background in focus (handy as this camera lacks a DoF preview)

Basic features the default auto mode and scenic modes. You get the usual presets (portrait , landscape, macro, sports and night portrait) as well as a flash force off mode. That’s to disable it from popping up in auto mode.

However the 3000V does offer TTL (as well as E-TTL & A-TTL) support for external speedlites. The F55 can only use external flash in manual mode.

The 3000V has a pentamirror viewfinder which offers a 90% view of actual frame. It’s a good screen although I prefer the F55. There is a clear LCD read out below the screen. It shows you exactly what you need to know with focus confirm, shutter, aperture, EV comp AEL Focus area and flash data.

It’s a fine budget inder although the Nikon seems brighter and with a slightly nicer screen IMHO. The Nikon also has a dioptre adjustable finder.

It’s a light camera at 340gms. It sits okay but I find the handgrip slightly narrow. It takes some getting use to using the layout if you’ve used older EOS bodies. This shift of mode dial and LCD may be a deal breaker or a few folk.

That does get easier but I genuinely find the F55 a little more user friendly to use. There is a little more logic in it’s layout

This is obvious set to use EF lenses and will work with Canon lenses made today. EF lenses leapfrogged the competition in the late 1980’s with their built in fast motors and fully electronic controls. The Ultrasonic ones are peachy quiet and fast and it’s a telling difference. Using non USM kit lenses I didn’t find the AFthat much faster than the F55 with older AF screw lenses. But stick on a USM lens and things really speed up.

You get a vast range of Canon and 3rd party lenses. The latter is always a gamble. But this works with my Yongnuo 50/1.8 which means it can cope with newer 3rd party chipsets.

Focus lock is generally good and quick. With non USM lenses it however isn’t notably faster than the F55

The camera allows you to use non EF lenses via adaptors. The EF mount is one of the widest for 35mm. So most other lenses makes in theory can be used if they have a manual diaphragm. You do get stop down metering as well but trying to focus on an AF screen is a bit of a challenge. The Nikon F55 allows you natively mount non AF AI revision F mount lens with no metering but focus assist which is much more useful.

look there isn’t much to say. This can cop with most general situations. the metering is accurate and focus is on ball.

Metering worked well and I can’t fault it from that or a focus point of view. I coped with some interesting situations well like the backlit image below.

If you’re wondering about some of the scan quality, that because I was comparing services (another post another day). Yets just say some were not so good.

There has been a fair few sold with lens between £10-30 on eBay of late, more if you want tested with some form of guarantee.I paid under a tenner for my body in February but that was good going with body only not being much cheaper than with lens.

Final Thoughts on the EOS 3000V

This is essentially a more stripped back 300V. And this makes an interesting question is that camera worth more money for your needs. For me it’s a yes as you get DoF preview, cable point and a better build. But that’s what you are spending the extra on alongside a few other perks.

This is quite a good camera if you can live with the foibles. Yup it is no heavy duty build and with pretty much being plastic and electrics except for the shutter I suspect will not outlast serviced much older classics like the A-1. But it’s light and can do 90% of what my 300X could do.Granted it has better build & viewfinder, DoF preview, 1 stop faster shutter and quirks like cable pointing but that really is it.

Versus the F55 is interesting. This was a a good fight. The Nikon certainly has a better feel and ergonomics. With non USM lenses, I’m not convinced the 3000V is much faster. But stick a USM lens on and the lack of fast AF-S support is telling. There are more focus points. And if you need to use serious flash, there is no choice the Canon is way more practical.

But the reality is they are both good enough basic cameras. Your choice should be based on what lenses you have or see yourself as having. If you shoot a Canon dSLR and want to dabble you could do worse. Likewise if you need a second back up body for your EOS 3. Again this will be fine at the cost of a few quid whereas a 300X will set you back way more

An older Gen EOS 500N is worth considering if you need things like DoF preview and cable release. It will cost around the same or little more than a 3000V.

Manual can be found at Butkus or here at 35mm-compact.com. It has a page at Canon Camera museum.