I’ve decided to set myself a wee challenge this year and buy a camera a month for the price of a Roll of film or less from my favourite discount film supplier (hence the Poundland  challenge). Although the first camera to arrive is the Halina Speedy 33 shown below I’ve actually been able to get one of the last Olympus film compacts for 99p as well and just missed out on a Classic Mamiya 4b rangefinder from the 60’s (knocked out by £1.20 with 4 seconds to go) 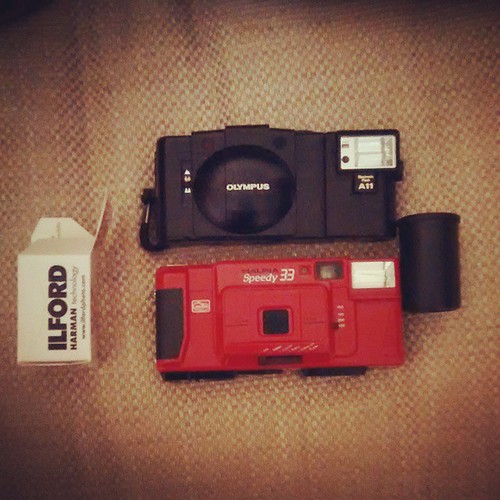 To do this I’ve set the following rules

I’ll run a couple of rolls through the camera and give some views on it but will then try to flog on eBay (unless it’s a total keeper) and we’ll try to keep a tally.

How can I do this ?
Well  trust me a lot of cameras  do go for 99p on eBay. Folk often list at that price as it’s cheaper and there is the logic that it might attract more bidders leading to a later bidding war. That’s all fine and dandy if you’re selling a  Nikon FE that’ll will probably go for £30-40 but for many cameras  that don’t have  a classic tag  this might not apply. I bought 4 cameras for 99p last year including an excellent Chinon 35EE rangefinder.

Selling times also matter. Auctions that end on Evenings particular at the weekend  usually do better, so the time to strike is often for things that end during the day or in the very small hours.

And it isn’t just things like the fixed focus basic Speedy 33 that end up going so cheap. I’ve watched tons of late autofocus zoom contacts fail to sell from good manufactures. Vintage cameras that don’t have a Cachet of some models can end up here (the Mamiya I missed was a beaut and someone got for just £1.20). My actual first Poundland camera is a Olympus Superzoom which was one of the last 35mm film cameras they made in 2005 – but the speedy arrived first and whilst it may turn out to be crappy was in perfect nick and fully functioning……….

9 thoughts on “The Poundland Camera Challenge”