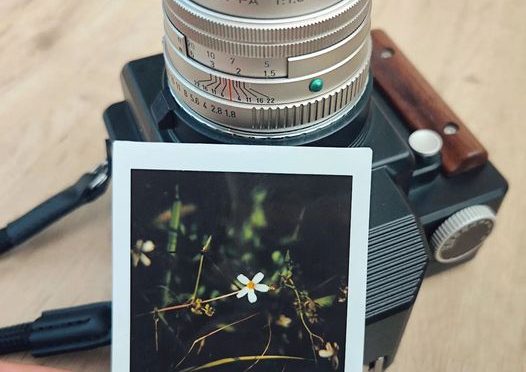 A few weeks ago I indicated NONS, those cheeky instax SLR folk, were back teasing the NONS SL660, a Instax square camera body. Turns out more than a tease and hopefully we should see this launched in the next few days. And it looks a cracker and I’ve a bit of an exclusive overview of the spec.

UPDATE (16/02/2022) – NONS launched this camera today on Kickstarter. The suggested retail will be $445USD which is similar to the SL42 cameras. KS backers may be able to get a healthy early bird discounts of up to 25% depending on demand.

NONS launched their first SLR 2 years ago. This effectively created the first new and only analogue SLR with interchangeable lenses in production since Nikon left the market. And it was the first Instax SLR. As great an idea as it was, there were some issues and NONS Launched better revised version a year ago. The Mark II is a much better although not perfect camera and I gave it our new camera of the year award for 2021.

But Instax Mini whilst the oldest Instax format is the really the titchy one. Instax square and wide just feel so much more like dare I say a polaroid. And that’s despite frame of the square only being ~ 1/3 wider but feeling oddly much bigger.

So NONS have gone one up with a heavily revised version that shoots the bigger Instax Square format the SL660. NONS indicate the 3 digital name is to delineate this as medium format camera seperate from the 2 digit SL42. They imply this is the first of a range of medium format models and have hinted a Instax Wide version may be in the offing.

First up the design of the camera is quite different with a squarer frontage. That frontage is now a single pressed aluminium alloy sheet which is a massive step up from the plastic of the SL42s. It’s good to see NONS moving to more premium materials but this will spike costs up. The plastic rear is as expected. If you’ve followed my posts you’ll know my original NONS SL42 jammed but both it’s replacement and the MkII that I upgrade too has performed well with use. That MkII has just survived 1m drop onto tarmac unlike a Canon EOS 500x

The size is radically different to the Instax mini version. The camera is less wide with a squarer shape from the front with a 131 x 92x135mm (WxDxH) dimensions. That’s no surprise if you own a SLR style 6×6 like a Kiev 6c. Shutter button has moved to the front but again is removable to get at a cable point. Funnily enough that’s where you find ’em on many a Soviet 6×6.

The displayed models have a wooden grip. NONS describe this as the default accessory indicating there may be more grip options at launch.

Have to say looks quite Lush to me. It’s also black coating on metal whih always gets a thumbs up.

Like the previous cameras, the SL660 uses a passive EF mount. The EF mount is arguably the best choice for using 35mm vintage glass as it’s one of the widest flange distances and there a wealth of 3rd party adaptors for. Although it can’t use EF lenses which require electrical contacts,

Irrespective of the mount there is a problem in using 35mm camera lenses on a 62x62mm Instax Square frame. 35 lens are geared to deliver to just a fraction of this (24mm x 36mm). Given the original SL42 notably vignetted with the smaller 46x62mm Instax mini frame, things could be disastrous.

But NONS have some form here the Mark II SL42 came with the NFE, a removable optical format extender. This adds lenses but works well reducing the the vignetting. There is still a little softness to the edges using this and you can see that in some of the SL660 demo shots as the rendering still falls out side the lenses purposed frame but it varies from lens to lens.

The NFE is back but Built in

This time format extended is built in. No precise optical details exist but we know it has at least 2 elements as NONS have stated the Leaf shutter sits within the elements. That protects the shutter but does mean you don’t have the option of removing the extender. The extender add a crop factor of 2 to your lens (50mm becomes a 100mm) and 2 stops to your lens aperture (so if your lens is set to f/2 you actually are shooting at f/5.6). This will make Bokeh shots harder to do alongside the fact you can’t shoot fast.

NONS indicate telephoto lenses may suffer from notable vignetting. The vignetting level varies in the test shots NONS have teased. Their own 50mm M42lens seem less than I got with a Yashica 50mm on the SL42 with a NFE.

We’ve the same leaf shutter mechanism but as discussed it’s between the optics of the format extender. The top speed remains unchanged sadly at 1/250. This is a design limitation and I suspect unavoidable. But 1/250 is a an issue if you want to shoot outdoors. Granted the format extender is going to add two stops to your lens (making your lens f/8 actually f/16 in practice) but in good light your lens is gonna be stuck at f/16 making Bokeh shots impossible without ND filters.

What’s less clear is the mirror mechanism. With the SL42 the whole mirror assemble slid to the side before the shutter opened and yu cocked the camera by means of a lever that basically dragged the mirror unit back against its springe tensioners. We have a lever here too (and a fancier one at that) but it has a vertical travel and I’m struggling to work how a mirror mechanism sits in the frame,

NONS say the viewfinder has a bigger but still not complete coverage of the FOV. The SL42 had a really small FOV compared to actual farme so this is welcome. I suspect it will also have the same screen as before which is okay (a microprism or split would be nicer)

The camera has the same metering set up as the SL42. You couldn’t get fully integrated metering easily here. The camera uses such a wide range of lenses none of which can link mechanically. I guess in theory you could do a stop down TTL reading but I suspect the camera would be way more expensive and you’d need a completely different shutter mechanism.

So we have the same set up as the SL42. there is an area sensor on the front of the pentaprism. That links to the shutter speed dial and a LCD screen will show a suggested aperture setting.

NONS have confirmed like the Mark II this will have built in rechargeable battery. Hot swap would be nice but will likely be a sealed in. A hot swap option not only gives the chance to swap out but also rechargeable batteries have a finite life so replacing down the line is easier. The scammy Protax of FHd I reviewed last year used essentially an old Nokia battery which i could but a replacement for a few quid and could get a seperated charger for. Grnyed that had a rubbish 900mA capacity but it proves you can do this and we know that NONS used a Panasonic unit. Why we couldn’t have that hot swappable was a shame but maybe the SL660 will sort that

The flash set up is unchanged. So sadly forget using your 1970 vintage looking simple unit – you’ll need a more modern dedicated flash (I use my SB-600 Nikon speedlite) .

Final Thoughts on the NONS SL660

This is a great step forward but there are still some issues. The build has been upped and I suspect the cost will be up too. The bigger format makes sense but how wieldy the camera is remains to be seen.

NONS are only tweaking the design mechanics a bit which is sensible. I’m a bit saddened the shutter speed isn’t up but it does seem a design limitation. The flash should have been tweaked to allow for older units but the shutter release may be at risk to the higher voltages that involve.

Hopefully the format extending optics work as well as their predecessor did with the NFE. The promo shots look good but they are obviously shot optimally.

Despite all that I’m going to be in the KS queue.

Alternatives to the NONS SL660

In fairness there is no other camera like the NONS models in production but there are some rivals. Notably MiNT offer 2 versions of a folding rangefinder – for Instax Wide (RF-70) and Square format (SF-70). These ain’t cheap and I’m not convinced about the optics. They also offer a vintage style TLR for the mini format. MiNT also refurb Polaroid’s original SX-70 1970’s standalone SLR (but this has a fixed lens) and have a customised SLR670 version.

All of these are fixed lens. Granted Lomography do a few cameras with interchangeable (Diana Instant Square) or add on lenses but these are viewfinder only.

Instax backs are a thing too. There is some history of this with packfilm for large & medium format cameras only dying out recently and historically ther were backs which allowed even 35mm SLR to use intat pack film. One of those, the Magny is back. Recreated by NIMH and uses Instax square. It does involve changing the film door on a one of the small range of suitable cameras (Most Leica M, several Nikon semi pro models like the FE2 and a handful of Olympus & Canon model).

But for bigger formats Lomography have successfully launched the LomoGraflox 4×5 back. Perhaps even more promising is Escure’s Hasselback Portrait a back for Hasselblad system medium format SLRs – but this is becoming vapourwear with a launch 2 years ago and no products delivered. Granted COVID might have something to do with it but the backers are sounding increasingly restless. That said even if it materialises getting a Hasselblad is not a cheap option.