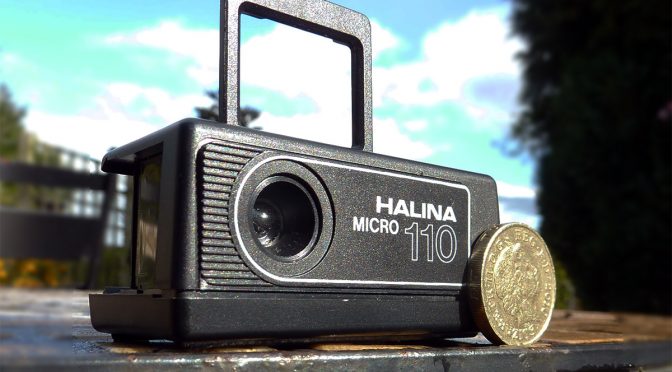 This ultra compact plastic camera has grabbed by attention for a while. It is for a toy camera a wonderful piece of design and possibly the smallest mass produced camera for a common film format. Haking have made some corking fixed focus numbers IMHO and some howlers  but where does this sit and is it the 110 world’s VUWS ? (NOTE now updated here)

(This review was updated  in light of better lab results as per here)
Haking can have pretty good form with cheap fixed focus numbers from pseudo TLRs like the Viceroy, to the Hong Kong Lomo the Halina micro 35 right up to cult classic plastic Panorama. They also made some car crashes too (Silhouette Zoom nuff said). They also went a bit nuts for the 110 format producing a load of cameras usually in the typical subminiature style with glass lenses but the micro is in a different class. It is smaller than the 110 cartridge it fits!

If you want crisp perfectly exposed shots look away now. This was a novelty toy class camera. We know it was on the market by 1986 (subclub.org date the US rebranded version the  Ansco 50 to that year). It was also sold under Haking branding  or as the Argus 20 and Alfo Mini 110 branding and probably more.  They are often quoted as being promotional freebie cameras so I suspect you’ll get it with various product branding if you look.

This is totally no frills or control with a fixed focus plastic lens and a single shutter and aperture. No stats exist online but the lens sits about 20mm from the focal plane. This makes sense as this puts the lens as slightly wide angled (18-24mm equates to 35-50mm on a 35mm camera). Given the camera is aimed for using probably 100 ISO film in reasonably good conditions and prior Haking plastic models, the 1/100 sec shutter speed quoted for the Ansco 50 seems about right. The aperture is harder to guess but I’ll assume f/8 or less as the Depth of field as we’ll see isn’t as good as cameras like the VUWS which have smaller apertures.

Design wise given the limitations and wholly plastic build it is outstanding. This one of the best though out cameras I’ve come across. For size the camera only encloses 1 of the 2 drums on a 110 cartridge. To protect the inner gubbins when not in use a plastic slide out strip is used. Cleverly this has half the instructions and  also slides in to the base on top of the other half. Although basic the pop up viewfinder also serves as shutter guard when folded down. The lens has no cover but is recessed when not in use. The camera had no features beyond the shutter button and is incapable of double exposures.

There are issues. I found the 110 Cartridge hard to fit and like many it was not so easy to remove. You have a sense at some point the camera will come to an explosive end but mines has lasted a few rolls so far.

Shooting conditions are therefore limited to film speed. Let’s be honest that’ll be either expired film at 100 ISO or lomography’s 100- 200 ISO offerings – so this I’ll be good conditions only. With tiger 200 you can get away shooting on cloudier days and when the sun is going down (I suspect it may well over expose too much on a sunny beach)

In terms of shots I need to caveat that I’m just starting with 110 film and am trying several labs out and this was base don the first lab I used. 110 film is about a quarter the frame size of 35mm so is harder to scan and more prone to artifacts. That said I had a roll taken on a Pentax auto 110 SLR that has come out at much more detailed indicating the lens here is at fault.

Irrespective of any lab issues, the lens is soft –  more like the Halina Panorama than the VUWS, but the again the VUWS is an unbelievable camera in use. Focus is sharpest about 3-5 metres away then falls off – I suspect a wider aperture is at fault here as the VUWS and Haking’s Halina panorama hold better with a f/11. The camera flares but not in a great way with bright light.  However overall it certainly feels a lot better technically than shots on Lomography’s Diana Baby 110.

So no –  it isn’t truly the 110 VUWS but Haking deserve a B+ for effort. it’s pretty good for such a compact toy camera and perhaps is the closest you can come with a plastic lens
(This review was updated  in light of better lab results as per here)